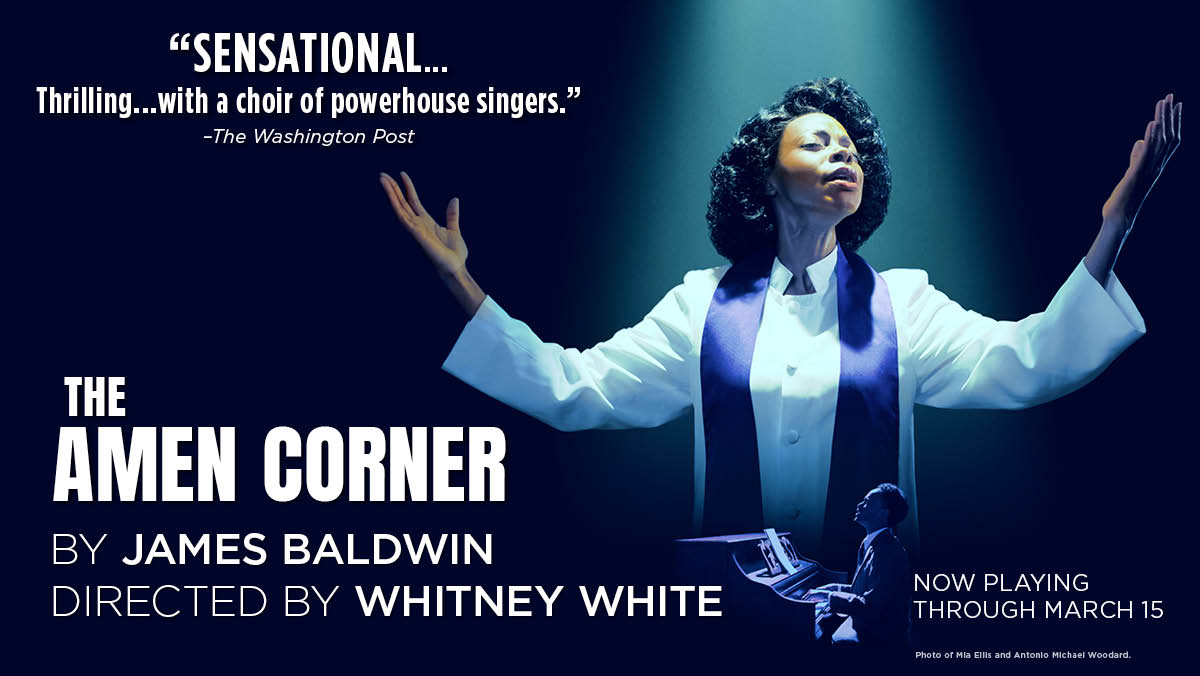 In a 1950s storefront church in Harlem, Pastor Margaret Alexander rails at her congregation and her teenaged son for their vices. With a gospel choir singing of redemption in one room and her son bonding with his ailing father over their love of jazz in the next, Margaret must face the music herself when a figure from her own troubled past returns. James Baldwin’s The Amen Corner tackles the role of the church in the Black community in this landmark work, written immediately after his breakthrough novel Go Tell It on the Mountain. Whitney White, winner of the Susan Stroman Director Award, makes her STC directorial debut in this powerful production rich with music, humanity, and Baldwin’s lyrical prose.

JAMES BALDWIN was born in Harlem, New York City, August 2, 1924 and died on November 30, 1987. He offered a vital literary voice during the era of civil rights activism in the 1950s and ’60s. The eldest of nine children, his stepfather was a minister. At age 14, Baldwin became a preacher at the small Fireside Pentecostal Church in Harlem. After he graduated from high school, he moved to Greenwich Village. In the early 1940s, he transferred his faith from religion to literature. Critics, however, note the impassioned cadences of Black churches are still evident in his writing. Go Tell It on the Mountain (1953), his first novel, is a partially autobiographical account of his youth. His essay collections Notes of a Native Son (1955), Nobody Knows My Name (1961), and The Fire Next Time (1963) were influential in informing a large white audience. His other novels include Giovanni’s Room (1956), about a white American expatriate who must come to terms with his homosexuality, and Another Country (1962), about racial and gay sexual tensions among New York intellectuals. Baldwin’s play, Blues for Mister Charlie, was produced in 1964. Going to Meet the Man (1965) and Tell Me How Long the Train’s Been Gone (1968) provided powerful descriptions of American racism. As an openly gay man, he became increasingly outspoken in condemning discrimination against lesbian and gay people. This project is supported in part by: