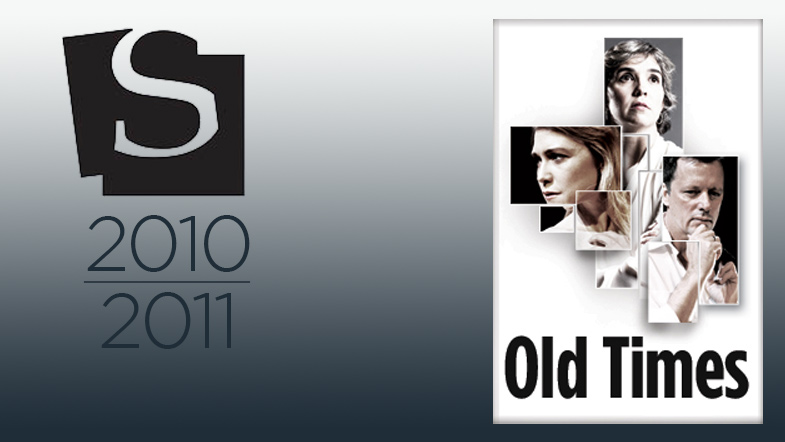 Memory and reality collide in Nobel Laureate Harold Pinter’s nostalgic and haunting play, Old Times. See what happens when an old friend visits a married couple and how their different memories of the past collide.  What do their memories tell us and which interpretation of the past do we believe? Old Times is an intimate and highly charged exploration of whether we can ever really know another person, or even ourselves. Pinter’s classic play, featuring his distinctive poetic style, is directed by Artistic Director Michael Kahn. Old Times marks the STC debuts of multiple Helen Hayes Awards winner Holly Twyford (The Little Dog Laughed; Lost in Yonkers), Steven Culp (American Conservatory Theater’s Blackbird; “Desperate Housewives”) and Tracy Lynn Middendorf (“Lost”; Lincoln Center Theater’s Ah, Wilderness!).


“The trio of actors handles the intricacies of Mr. Pinter’s dialogue with intelligence and grace.”
DC Theatre Scene

“★★★★…Utterly engaging, mysterious and provocative…Kahn’s command of his cast makes for a powerful delivery of Pinter’s work”
Metro Weekly

“Every aspect of this production is impressive”
Wall Street Journal

Do not — we repeat — do not adjust your glasses. Your ability to distinguish the figures appearing before you is just fine. It is the characters themselves who are beguilingly blurry in Harold Pinter’s “Old Times,” a play as deliciously elusive as some of the most intriguing people you’ve ever run into.

And in the vibrantly theatrical production orchestrated by director Michael Kahn, the enigmatic beauty and humor of this 1971 piece for three actors are marvelously dramatized. In this instance the three actors — Steven Culp, Tracy Lynn Middendorf and Holly Twyford — make up an expertly assembled trio in the guises of characters who brandish their grasps of the past as weapons in the struggle to define who they are to one another at this very moment.

That you’re never entirely assured of what sort of reality these people inhabit is utterly unimportant; all kinds of theories have been advanced over the years about the cosmic conditions in which this brisk evening unfolds. Thinking you’ve come up with a concrete “solution” for what transpires is as silly as it is boring — the ennui that also accompanies too much earnest dream analysis. One of the joys of “Old Times” is in the variety of moments at which you see clearly what these characters do to one another — even if you never fully understand why.

It’s a pleasure to watch Kahn’s acute hand in the guiding of three polished performances on the stage of the Shakespeare Theatre Company’s Lansburgh Theatre. Although he tends more often in his professional duties to practice high-end crowd control with far more heavily populated classical plays, Kahn has sensitive antennae for the refinements of psychology that can be drawn out of a play with a small cast. That facility was apparent, for instance, in his treatment several years ago of the Tennessee Williams one-acts of “Five by Tenn,” mounted at the Kennedy Center.

Here, Kahn helps the actors find the exquisite tensions in another modern master — and there’s no reason for his company not to engage in such superb tempo-shifting from time to time. For though the narrative outlines remain purposefully vague, the temperature of the relations among these characters is kept by the director at a gratifying near-boil.

We are for this occasion in the English country place of Culp’s Deeley and his wife, Middendorf’s Kate, a refuge rendered by the excellent set designer Walt Spangler with a color scheme best described as white on white on white on white. In other words, it is the blankest of canvases — a domain in which the spectator can apply any colors he or she chooses.

That’s apt for the events that ensue. Deeley and Kate await the arrival of Twyford’s Anna, a woman who may or may not have been an influential figure from Kate’s long-ago London life — or separately, for that matter, from Deeley’s. What’s clearly the case, however, is that Anna’s visit is received by Deeley as a provocation, a threat to his possessive attachment to Kate, who is embodied by coolly beautiful Middendorf as a serene prize, the type of ethereal woman for whom men (and women) rightly might vie.

Middendorf’s eternally far-off mien — with the trace of a Mona Lisa smile — seems an invitation to the others to come up with any ruse they can to divert her, to make her theirs. And compete Deeley and Anna do, in ways both desperate and funny. As they recline and pace and smoke in all that whiteness, they give accounts of past encounters that sometimes add up and at other times conflict. Did Deeley really look up Anna’s skirt in a bar years ago and spy her in Kate’s underwear? Did Anna actually watch one night when a young Kate bedded a man as seemingly needy as Deeley?

The contest has its giddy interludes, in the “can you top this?” snippets of romantic standards with which Deeley and Anna take turns serenading the inscrutable Kate. Music as well as language is used here not to entertain, but to assert primacy, and recollections of old songs and situations become vehicles to trump, distract or disorient an opponent. It’s the casual evening at home as steadily awakening volcano.

The tenor of the evening is dictated in large measure by Deeley’s reactions: We measure his threat level as a means of trying to decipher the connection between Kate and Anna. Culp makes for a terrific cauldron of male ego and entitlement, and he proves an amusingly readable foil for Anna’s aggressive effort to stake a claim to Kate.

The accomplished Twyford, making a superlative debut with Kahn’s company, applies a veneer of graciousness to Anna, even as she continually turns up the pressure on Deeley. Costume designer Jane Greenwood strikingly outfits Twyford in a long, elegant dress, and her dark hair in an intimidating cascade of buns; Middendorf is swaddled in softer, billowing robes. The eye-catching wardrobe choices become yet another of the stylish ways that Kahn’s “Old Times” stokes Pinter’s hypnotic rhythms.