Hear from women leaders—all authorities on mental health—as they discuss the portrayal of bereavement and madness in Shakespeare’s Hamlet and in the world around us. 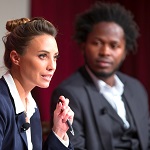 Dr. Jocelyn Kelly is a social scientist who works to promote women’s rights in conflict and crisis. Her research also focuses on understanding the attitudes and experiences of rebels perpetrating violence in order to understand how best to prevent it. Jocelyn’s work has been profiled on NPR, and in Nicholas Kristof’s “On the Ground” blog. She has given briefings related to gender and security to the United Nations Security Council, the U.S. State Department and the U.S. Institute of Peace, among other organizations.

Dr. Jean Kim, MD, MA  is a Clinical Assistant Professor of Psychiatry at The George Washington University where she teaches a course on psychiatry and literature. She trained in psychiatry at Mount Sinai and has worked as Chief of Mental Health Clearances at the U.S. State Department and as Unit Chief of the Women’s Program at New York-Presbyterian Hospital-Westchester Division. She has an MA in Writing from Johns Hopkins, a BA in English from Yale and has written for The Washington Post, The Daily Beast, Psychology Today, Salon, The American Scholar, and more. She is a 2016 Notable Essayist in Best American Essays. 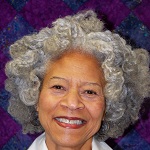 Dr. Andrea Sullivan, PhD, ND is a naturopathic and homeopathic physician, author, lecturer and has a private practice in Washington, D.C. She studies with homeopathic physicians from Mumbai (Bombay), India, and is a diplomat with the Homeopathic Academy of Naturopathic Physicians. In 1976, Dr. Sullivan became the first African-American woman to receive a PhD from the University of Pennsylvania in sociology/criminology. She has served as assistant director of the Administration of Justice for the National Urban League in New York City and as a special assistant for President Carter.