A Note from the Director 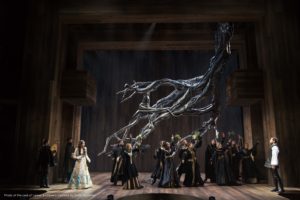 About a year and a half ago, I was out to dinner with a producer friend of mine. It was the night of the second presidential debate. We were talking about what musical I should work on next, and he suggested Camelot. I was skeptical at first. I remembered the show as mostly consisting of pageantry and sentimental idealism—what place could that possibly have now, I thought, in a cultural climate that was only becoming nastier and more cynical? When I went back to read it, I was still on the fence. The script was sprawling and way too long.

And then the election happened. Suddenly, I saw the story of Camelot with fresh eyes. At its core the legend of King Arthur—especially in T.H. White’s The Once and Future King, Lerner and Loewe’s source material—is about an enlightened mind, a thoughtful and benevolent leader in the middle of the Dark Ages. I hadn’t understood the magnitude of how the fate of an entire nation—really all of civilization—rests on one pair of shoulders. Beyond the walls of Camelot lies a world of cruelty and violence, every person for themselves in a coarse struggle to survive. Arthur understands that there is another way to live—a world where the strong protect the weak, instead of exploiting them. A world where the powerful use their influence for the greater good, instead of for selfish endeavors.

But as the musical shows, this is not a simple notion for one man to implement, or even to live in his own life. The play implies that violence is our natural state, that the potential exists for society to backslide to its baser instincts at the drop of a hat. The project of enlightenment is a very fragile one, and when things go wrong Arthur must battle to keep his dream from being crushed by the sheer weight of human brutality.

This was a fight that felt familiar to me. A few months ago I was working on an opera in Portland, and on the last day of tech there was a rally across from the opera house. I waited in line at Starbucks behind a group of Neo-Nazis. A few years ago, I never would have thought that I would meet Neo-Nazis. But there they were. As we grapple with how our country has changed, as the framework of what’s acceptable continues to shift, the idea of Camelot—that enlightened leadership, kindness and respect for each other is not something to be taken for granted, in fact is something to fight for, feels more and more urgent.

Camelot is a show that people tend to think they know well. But usually they only know the songs, or perhaps White’s book, or the general idea of the Round Table. I believe our job in this production is to treat this like a new musical that people don’t know. It may be quite different than you remember.

At the end of the show, when the savagery of human affairs has crushed Arthur’s dream, one small ray of hope arrives. It is a vision of the future, an expression of the way that King Arthur’s legacy lives on—and perhaps what that legacy could mean to all of us as well.