A Question of Authorship 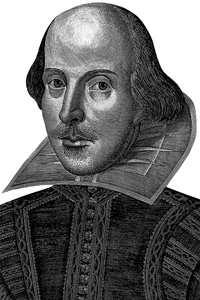 When mentioning “authorship” in connection with Shakespeare the conversation is usually about one thing: Was Shakespeare the author of his plays? It is a question for lovers of conspiracy theories and Shakespearian scholars but is less interesting for audiences. For audience members questions of authorship take on another meaning. Who is the author of a production? This is a question that at first glance seems answerable: the playwright wrote the play. However, in the world of theatre the answer is more complicated.

When seeing a play at STC, Shakespeare may have written the words, but who crafted the staged experience? Shakespeare did not set Much Ado About Nothing in a Cuban hacienda or The Two Gentlemen of Verona in a past-future hybrid. The “concepts” placed on Shakespeare’s productions by directors, in this case Ethan McSweeny and PJ Paparelli, affect more than design choices. As an audience member the story you are enjoying is a result of more than just the words. Every movement, color and sound is an adjustment to the story being told. A great production uses all these tools to craft a play that goes beyond the text. Theatre is a collaborative art and thus every person who adds a creative idea to the production is shaping its outcome. Though the “playwright” is typically thought of as the author of the play, the word contains references to its non-literary origins. “Wright” refers to a craftsperson or an artisan. Thus, a playwright is the crafter of the play. It may be the most common usage today but to craft does not equal to write.

This question about who “crafts” the play is more complicated once copyright laws come into play. Because a work needs to be “fixed” in order to be entitled to copyrights it is harder to proclaim the ownership of a production. The textual script is tangible and the writer can prove ownership but the experience of the production clearly goes beyond the words. According to the 1971 Berne Convention for the Protection of Literary and Artistic Works, “choreographic works and entertainments in dumb show” are also covered. However, there needs to be some fixed representation of that work. Intellectual property issues do frequently arise in theatrical settings. The copyright laws do not favor work that is generated by collaboration.

When classical works are staged, as is the case at STC, the author is usually long deceased. More often than not, the work being produced is within the public domain allowing a creative team the opportunity to make greater artistic choices. Many of Shakespeare’s plays have graced our stages in multiple productions. Each production tells a similar story but no two are alike. So, the next time you are watching a play do not ask “Did Shakespeare actually write this?” You should instead wonder: “Who is really the author of this production?”