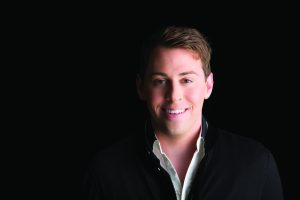 When Alan Paul was about to graduate from Northwestern’s undergraduate acting program, he had an inconvenient realization: he wanted to be a director. So what was his first foray into the world of professional directing? Based on the wildly successful musicals he has mounted at the Shakespeare Theatre Company over the last few seasons, you might guess a title like West Side Story—and you’d be wrong. In fact, at 21, Paul and his friend partnered up to direct Shakespeare’s Richard II in repertory with Machiavelli’s Mandragola. Not exactly Hello, Dolly!

Paul has long been obsessed, as he would say, with Shakespeare and his contemporaries. A D.C.-area native, he eagerly attended STC productions as a teenager and carried a battered Norton Shakespeare anthology everywhere he went as a college freshman. Soon after his first production, he landed at STC as a Directing Fellow and spent the early years of his career assisting top classical directors on a myriad of plays. Later, having moved up the ranks to Associate Artistic Director, Paul had the chance to embrace his other passion, helping to introduce musicals to STC’s repertoire with A Funny Thing Happened…, Man of La Mancha, and Kiss Me, Kate. Nine years after he got his start at the Company, he’s directing his first Shakespeare play for STC.

As Paul points out, the skills required to be a great director of musical theatre are quite similar to those required to helm a classical play. Directors of both must wrangle large casts, control the tempo of long performances and balance heightened style with naturalistic settings. And for him, working in both genres comes down to leadership—communicating his vision to others and finding ways to execute it together.

Literary Manager and Production Dramaturg Drew Lichtenberg sat down with Paul to discuss his take on Shakespeare’s most famous love story.

Drew Lichtenberg: What new challenges are you discovering while preparing for Romeo & Juliet?

Alan Paul: Before I started work on Romeo & Juliet, I knew I was supposed to like it, but I never fully understood the play. When I went back to the script, I realized the play was quite different from what I had thought.

The structure of the play juxtaposes two different parties, one that happens and one that doesn’t. There’s this magnificent party in the first third of the play, where Romeo and Juliet meet. But the final third is punctuated by another party—a wedding for Juliet and Paris. The Capulets get ready to have the party, but it doesn’t happen because they think Juliet has died. There’s something really eerie about throwing a fabulous party, days after Tybalt and Mercutio have died. You see the ways Lord and Lady Capulet are trying to hang on to anything they can control, in a world out of bounds. It was a big insight for me into how to conceive the play, and it’s something I had never seen explored before.

The other (and related) hook for me has been the family drama—the Capulet family. They are a very specific family, and sometimes the dynamic of that family drama is lost. Certain behaviors seem inevitable when you’re in period clothing, and that’s one of the reasons I wanted to set the play in modern dress. If you look at the dysfunction of the Capulet family through a modern lens, it can be as real and specific as any modern play.

DL: There’s immediacy in a good production of Shakespeare, where it just becomes a story that you’re engaged in emotionally.

AP: I think it’s the hardest thing with this play. This is one of a couple of plays that are so etched in our frontal lobe that everyone knows what’s coming next. But nothing is inevitable in this play. If any tiny thing had turned out differently, Romeo and Juliet might not have killed themselves. We have to keep the possibility of this alive until the very final moment of the play.

This will be the first Shakespeare that many teenagers see. I want them to walk in the theatre and see people that look and dress like them, and have the experience of being a teenager reflected in a really powerful way. These characters are a mirror for us to understand and explore the anxieties and the thrills of being young.

Shakespeare wrote so acutely of the complicated emotions that go on when you’re an adolescent. It’s amazing that before depression and suicide were really studied, he had an uncanny understanding of how it manifested. When you meet Romeo for the first time, he shows the clinical analysis of traits of a suicidal person. I do worry that the end of the play glamorizes suicide. But our goal is to really understand the truth of these relationships and why each person makes decisions in the moment that lead to such a terrible conclusion.

I’m not interested in the idea that Romeo and Juliet only experience impulsive, “young love”, or that they’re just teenagers. I think we need to take Romeo and Juliet’s love completely seriously.

DL: The language also reflects Shakespeare’s deep understanding of people. Romeo and Juliet stop speaking in rhyme after they meet each other. In the balcony scene, the language becomes much less formal, flowery, affected. It’s almost like when you have a real-life teenager who is putting on an act, then finally feels like he can drop it.

AP: Yes, Romeo has quite a bit of wit in the beginning of the play, there is a lot of wordplay between him and Benvolio and Mercutio: picking up on each other’s phrases, turning them in other directions. It’s a defense mechanism from being emotionally honest. And as you’re saying, the formality melts away when Juliet appears.

AP: Though she barely says anything before she meets Romeo.

DL: She doesn’t come out of her room when she’s called by her mom.

AP: She’s busy. She’s a teenager. But with Romeo she becomes this bold, expressive young woman.

Mercutio is interesting too. You need that cynicism injected into the romanticism of the first half. It is like a wedge driven in—with incredible humor—but it’s a stinging sense that haunts the whole play. And Mercutio’s vision of discord in the world, underneath what he says, goes completely against the grain of the other characters.

DL: Shakespeare, like us, is looking at a world seemingly gone crazy, and trying to answer the question: what would make this cycle of violence stop?

AP: What’s true of the play and of our world right now is the intensity of that feeling. People right now are so quick to violence, on whatever side, and there is a lot of acting before thinking. That’s exactly what happens in this play. Shakespeare is never not timely.

DL: I think it might be his best tragedy. It’s an expertly written play.

AP: There’s something uneasy beneath the surface of this play. The same is true for the teenagers the story is about, who can seem fine when they are not. It’s early Shakespeare, so most of it’s in verse. The thoughts seem very ordered on the page, but what’s going on beneath them…

The language has endless depth and richness and possibility for many meanings. The interpretation can’t come only from a modern perspective, you have to really go underneath what they’re saying and how they’re saying it to discover what Shakespeare was trying to do. You can go very deep if you have the ability and you have the interest. And that’s what I want to do.