Playwright David Greig shares an inside look at why he wrote Dunsinane.

What made you want to expand on a Shakespeare play? That seems gutsy… 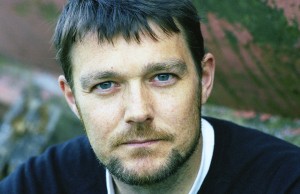 I know! All I can say is, it didn’t seem particularly hubristic when I first though of it. It felt cheeky and interesting. In the mid 2000’s I saw many productions of Macbeth. It seemed very fashionable at that point. At a production of the play in my local theatre in Dundee I realised the play ended when the story needed to start: what happens after the dictator falls. Macbeth ends with a speech about how everything’s going to be just fine. Malcolm says, in effect, ‘mission accomplished.’ It seemed interesting to write about what happened next.

But also, there was a real king Macbeth. Many scots can tell you that Shakespeare’s portrayal bears no relation to Macbeatha who ruled for a long time and was, quite possibly, a good king. So I wondered about setting my play not in Shakespeare’s world, but in the ‘real’ Scotland of the 11th century.

I must admit, on opening night in London, I felt physically sick as it dawned on me the sheer hubris of what I’d undertaken. I simply hadn’t thought about it until I saw and audience coming in. I offered up a few pleas to the ghost of good king Macbeth while I sat in the back row. I thought, maybe the curse on ‘the Scottish play’ is the result of the angry shade of the good king resisting his constant calumnies. So I said to him, ‘look, this play is your chance to get your side of the story out… maybe you could offer some theatre magic to help?’

Why Macbeth in particular? (Were there themes you wanted to highlight?)

Does Macbeth have particular resonance in Scotland? Is it part of the standard curriculum? Seen as part of Scottish heritage?

Macbeth is well known, of course. But many Scots know that there was a real king, as well. The place names are familiar: Birnam, Dunsinane, Glamis… they are all places on the A9 road north.

The play, though, is not seen as particularly Scottish. It’s just a good play. It doesn’t get produced any more or any less that other plays by Shakespeare.

Did you have to adapt the play for American audiences at all? Is there an understanding that we may come in with less context?

I didn’t make any changes. I hope the play adapts to whatever context it finds. For example, when we played the show in Moscow the audience felt powerfully that we were describing Ukraine. I expect in America it will have resonance around Iraq. But, who knows, the audience might also be interested in the way a strong woman can play a tricky political hand of cards?

Adapting Lady Macbeth: How do you take such a classic character and make her your own? 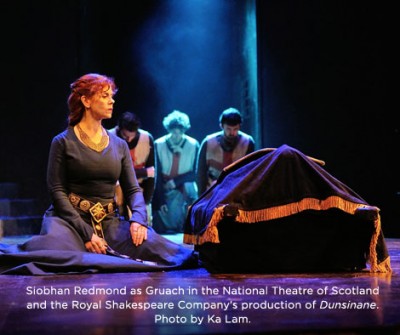 I didn’t take Shakespeare’s queen at all. She dies at the end of Macbeth. My Gruach is based on all the knowledge I could find about the real queen, Gruach. She was a very powerful royal princess who married a little beneath herself. Macbeatha won her by murdering her first husband! Gruach knows the ‘victors’ paint her as a witch. This is a reputation she manipulates to her own advantage.

In general, how do you avoid riding Shakespeare’s coattails? Is that something you worry about?

I didn’t worry too much about it. Focusing on the real history seemed to free me from that concern. But, you know, if you’re going to hang on anyone’s coat-tails then Shakespeare’s is as good a coat as any.

How do you go about writing a play like this? Do you have to do a lot of research, or did you mainly work from the text of Macbeth?

All my research was based on the 11th century story. I didn’t really consult the play text at all.

Have you done projects like this before? Are you working on anything else?

My very first play, as a student, was a sequel to The Tempest. It told the story of Caliban and Ariel after everyone had left the island and gone home to Milan. So I have previous.

Do you have any particular ambitions or expectations or hopes for this DC production?

No, I just feel privileged to have been invited to play here and I’m very curious to see how it goes down.

Just that the actors are brilliant, especially Siobhan who was driven the show from the very start. Go see it just for her!