In 1609, a group of settlers sailing to Virginia (named in 1584 for the “Virgin Queen,” Elizabeth) wrecked on the shore of a strange island after a sudden sea-storm. They landed in Bermuda, the beginning of that island’s ill associations with lost travelers. Uniquely for Shakespeare, this episode can be traced directly to one of his plays. Indeed, Shakespeare might have known William Strachey, who wrote the earliest and best narrative of the shipwreck. Shakespeare’s patron, the Earl of Southampton, was an investor in the expedition, and Strachey would later live in Blackfriars, close to the indoor theatre where the play inspired by his account, The Tempest, was likely first performed. 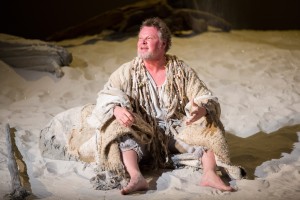 True, it shares a visionary supernatural dramaturgy with A Midsummer Night’s Dream, and its narrative of brotherly banishment is a feudal theme that pops up throughout Shakespeare’s work. But The Tempest is set in a new world of colony and slavery, of bold exploration spurring cries for universal suffrage. In fact, The Tempest inaugurates an entire genre of sea-swallowed survivors and shipwrecks on strange islands, from Robinson Crusoe and 20,000 Leagues Under the Sea to Survivor, Castaway and Lost.

The Tempest is unusually short, and Shakespeare is uncharacteristically keen to conform to classical rules of dramatic structure. The play doesn’t merely happen in real time, but time seems to shorten as we move through the action, with the three groups of shipwrecked survivors spiraling around the island in concentric circles until they finally knit together. 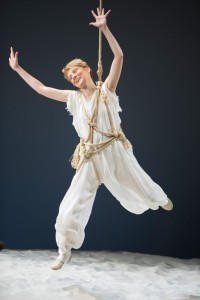 Presiding above this action is Prospero, a powerful magician who manipulates the other characters in the manner of a theatrical director. Prospero, we learn, was once Duke of Milan, usurped by his scheming brother. The story is an elaboration of Machiavelli’s The Prince: an indolent ruler losing his crown to an open-eyed conspirator. In this play, however, the plot is doubled, tripled, even quadrupled. The result is a cascade of plots that force us to reflect on usurper and usurped, master and slave. For when Prospero arrived at the island, we also learn, he took the rightful inheritance of the island’s two natives: Ariel and Caliban.

They are two of Shakespeare’s most remarkable creations, and he invents entirely new dramatic languages for both of them. The “delicate spirit” Ariel, able to adopt any shape, at home in every element, serves as the chief stage manager of Prospero’s remarkable theatricals, which have equal capacity to amaze and terrify. One of the play’s cardinal achievements (and one familiar to fans of Star Trek) is Ariel’s detached yet sympathetic perspective on human behavior. Unlike Puck from A Midsummer Night’s Dream, who revels in mortal misfortune, Ariel is Spock-like, finding the human actors of Prospero’s plays-within-the-play to be puzzling, strange and ultimately worth value. In her interactions with Prospero, we witness the servant becoming the master of the master, Art communicating directly with Life. 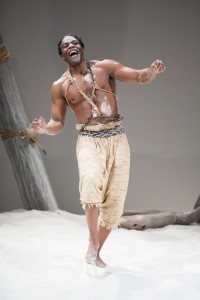 As for Caliban, perhaps no character in Shakespeare has inspired more controversy, or prompted such a constant stream of epithets. Though he speaks fewer than 200 lines in the play, and is described by other characters as a monster or animal—a “savage and deformed slave,” a “devil,” a “freckled whelp”—Shakespeare goes to great pains to portray Caliban in as human a manner as possible. An untutored native, Caliban possesses a tragic inwardness, and Shakespeare invents a language for him of depth and novelty, utterly unlike the comic prose of the drunkard and clown who share his plot. Caliban has a unique ability in the play to apprehend the natural world, and his poignant reverie on the island’s music, at the midpoint of the play, mingles tenses with a curious and sublime grace.

“The isle is full of noises,” says Caliban. Indeed, The Tempest is the most musical of Shakespeare’s plays, shot through with strange sounds, chiming with words such as dream, spirit, sea and sleep. The play, to paraphrase Ariel, is something “rich and strange,” a beautiful object that loses us in its own mazelike rhythms. Writing at the end of his career, Shakespeare seems to have reached a peak of virtuosity, and there is an unmistakable nostalgia pervading the play’s menagerie of theatrical effects. One senses Shakespeare, like Prospero, looking into the “dark backward and abysm of time” and recollecting a life lived in dreams, spent creating illusions for the stage.

Perhaps this is the reason for the play’s unusual economy of structure, as well as Prospero’s fateful decision to renounce his theatrical magic. By relegating so much of the plot to backstory, Shakespeare devotes his dramatic action almost exclusively to final reckonings. Invariably, they are of the tender and human variety. We are asked, alongside Prospero, to stare into the mystery of the human comedy, and into the beautiful fantasies it sustains. The tempest, it turns out, was an illusion created by Prospero, and all of us are safe, despite our momentary terror. The same could be said of practically every scene in the play, full of sound and fury, signifying something.

This play, Shakespeare’s veritable last word on the theatre, also addresses theatre’s limitations, its ultimate failure to manifest dream as reality. With the shift from a medieval world to a modern one, from religious quest to scientific discovery, Shakespeare seems to be hinting at an attendant loss of mystery. The dramatic action of The Tempest is nothing less than the destruction of the theatrical illusion itself, and with it, the setting of the sun on an entire era in world history.

The Shakespeare Theatre Company’s production of The Tempest runs through January 11 at Sidney Harman Hall.