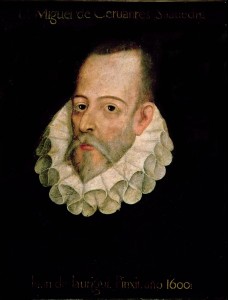 Man of La Mancha is a tribute by Dale Wasserman, Joe Darion, and Mitch Leigh to Miguel de Cervantes’ Don Quixote. The musical is an adaptation, more of a “reading” than an attempted recreation of the novel, but it captures the spirit and much of the tone of the original.

The creators of Man of La Mancha understand essential elements of Don Quixote, Don Quixote, and most importantly perhaps, Cervantes. They realize that the author knew how to bring the literary and cultural past of Spain into a text; Cervantes simultaneously appreciates precedent and brings about change. Man of La Mancha does not provide snippets of the Don Quixote narrative with songs, but instead the musical functions almost as an expressionist dream play. It gets into the heads, as it were, of the unconventional protagonist and the man who invented him. After all, Don Quixote celebrates the compositional process as well as the final product. The novel reflects key aspects of Spanish society and human nature, immediate contexts and universal customs, perception and perspective. As a novelist, Cervantes seems to relish the unexpected. Irony becomes one of the book’s principal tropes, but irony here is accompanied by humor, good will, generosity, and, loosely interpreted, a kind of faith. Literature, or artistic self-creation, is always part of Cervantes’s narrative  scheme, and it is always assimilated into the depiction of life. A strategic point of the integration is that it is anything but seamless. 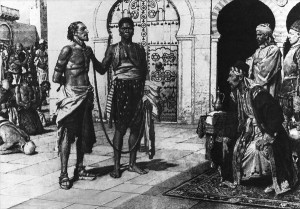 Cervantes brought before Hassan Pasha, the King of Algiers, author and date unknown. Via Wikicommons.

On one level, Don Quixote separates itself from the idealistic narratives that were especially popular in 16th century Spain: sentimental, pastoral, and chivalric romances. The last of these was the preferred reading of the self-styled country gentleman who chose to emulate the exploits of medieval knights errant. In this sense, Don Quixote eschews idealism for realism by exposing the chivalric ideal as a construction, but the style and scope of Cervantes’s work do not conform fully to the standards of 18th- and 19th-century European realism. Cervantes blends realism with heavy doses of literary self-referentiality, a consciousness of the construction of the art object that has been labeled metafiction, that is, fiction about fiction. Replete with allusions to Spanish chivalric tradition and to preceding texts and genres, Don Quixote foreshadows narrative realism and naturalism and, alternately, their counterpoints in modernism and postmodernism. Cervantes leads readers in antithetical directions by steering them toward ironic distance and empathy; they stand apart from the main characters yet respond emotionally to them. The sign systems of the book relate jointly to the world at large and to the domain of literature. The adventures of the anachronistic knight are fundamental to the story, but Cervantes appears to have much more on his mind as he moves the narrative forward. 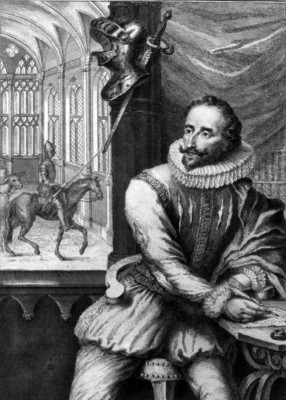 Don Quixote, now viewed as a single novel, was, in fact, published in two parts, in 1605 and 1615. Cervantes (1547-1616), 58 years old when the first part came out, had known only modest literary success. A wounded and decorated military veteran, he had been on his way from Italy to Spain when his ship was hijacked, and he spent five years of captivity in Algiers. Finally ransomed, he failed to prosper professionally or personally on his return. He published a pastoral novel, Galatea, in 1585, along with occasional poetry. He desperately wanted to triumph as a dramatist, but he was eclipsed by his gifted and prolific contemporary Lope de Vega and Cervantes’ full-length plays and interludes remain largely unperformed. Cervantes married a woman 19 years his junior, and the union, by all accounts, was far from happy. He trod a number of career paths, without solid rewards. Despite these frustrations and failures, he kept busy writing, and, at an advanced age, he won unqualified acclaim through Don Quixote. The narrative hit a chord with readers of many stripes because it is deep, complex, sophisticated, highly entertaining, and accessible. Cervantes subsequently was able to publish 12 “exemplary novellas” (1613) and eight plays and eight interludes (1615), together with what he deemed to be his master work, an “epic in prose” titled The Trials of Persiles and Sigismunda (published posthumously in 1617).

Don Quixote is, from several angles, bidirectional. It fuses realism with metafiction, and it offers two plots. The journey of the knight errant, or errant knight, in search of fame and service to his lady Dulcinea del Toboso (i.e., the farm girl Aldonza Lorenzo) and to humanity, is juxtaposed with a running narrative about the writing of a chronicle of Don Quixote’s quest. The prologue to Part 1 features a fictionalized Cervantes with a manuscript in hand but no prologue. A friend (the alter ego of an alter ego) advises him to bypass the protocols of prefatory materials and to include whatever occurs to him; the task is merely to fill in the space of the prologue, and the dialogue and some hastily written poems do just that. Irony and subversion can be seen from the start. The prologue—or, more properly, the metaprologue—is addressed to the “idle reader,” but readers of Don Quixote can hardly be passive. The “friend” shuns blind allegiance to the norms of art, and novelty and innovation are in the air. From the opening chapter, then, Cervantes challenges the aims and limits of fiction.

While Cervantes was laboring over the second part of Don Quixote—an undertaking that was entering its tenth year—his literary moment of glory was diminished by the appearance in 1614 of a spurious second part of Don Quixote by a writer, still unknown, who used the pseudonym Alonso Fernández de Avellaneda. Clever but by no means brilliant, “Avellaneda’s” sequel rode the wave of success of Cervantes’s novel. On the one hand, the attack and the intrusion were hard for Cervantes to swallow. On the other, Cervantes made the decision to bring the Avellaneda tome into the legitimate Part 2, and the writer’s headache became a boon to his continuation of the novel.

The speaker of the prologue to the 1615 Quixote seems to be Cervantes,
who promises to avoid further unauthorized sequels by killing off Don Quixote at the end. Scholars generally posit that Cervantes left unchanged what he had written of Part 2 prior to the publication of the Avellaneda volume, which does not receive further reference in the text until chapter 59. Up to that moment, the second part builds heavily on the impact of the publication of Part 1.

The “real” second part has Don Quixote leafing through a copy of the despised imitation at an inn and in a printing establishment. A teenaged temptress in the ducal palace recounts a near-death experience in which devils were playing tennis with copies of the book instead of balls. Don Álvaro Tarfe, a character from the Avellaneda sequel, appears in the 1615 Quixote to certify that this Don Quixote is the authentic one. When, after an off-stage illumination, Don Quixote rejects his chivalric identity at the end, he manages to degrade Avellaneda in his words and in his will. Cervantes’s vengeance is adroit and amusing, but the author may not have realized how valuable the false sequel would be. The ironies of the “true history” have the perfect twist, for the interloper has made the original genuine, “true.” Don Quixote himself gains vigor as he seeks to discredit his adversary. Cervantes could not have devised a better complement to his narratives.

By uniting process and product, Cervantes examines the ups and
downs of creation through multiple approaches. He incorporates the literary past and the act of writing into a story that poses as history. Criticism,
theory, and allegory are constants, and Part 1 is under strict scrutiny in
Part 2, which also deals with, and skillfully integrates, the false sequel. Don Quixote is both a novel and a theory of the novel, an exercise in self-reflection and yet paradoxically moving. Cervantes involves readers and invites them—or forces them—into the picture, to participate in the proceedings and to deconstruct the notion of the idle reader. Don Quixote dies at the conclusion of Part 2, only to be revived in the future development of the literature and in virtually all media, including theatre, dance, music, film, and the visual arts. The imprint of Don Quixote is wide and profound. The novel fosters an appreciation of artistic methods and the ties between the creator and consumer of art.

The Man of La Mancha team recognizes that Cervantes’s paradigms promote transformation and flexibility. Following Cervantes, they place the author, the protagonist, and the audience equally in the center, and they highlight the metatheatrical facets of the text. In search of a special signature, Wasserman, Darion, and Leigh reconfigure the story. They add songs, they portray dual realities (or dual fictions), and, notably, they bring in a flesh-andblood Aldonza/Dulcinea—only alluded to in Don Quixote—to interact with the knight and his squire. They combine an intense idealism (see “The Impossible Dream”) with comedy and with an ever-lurking reality. As with Cervantes, their Don Quixote is ludicrous, off-putting, and indisputably appealing. One laughs at him, cares about him, and, surprisingly, suffers when he suffers.

Edward Friedman is Gertrude Conaway Vanderbilt Professor of Spanish and Professor of Comparative Literature at Vanderbilt University, where he also serves as director of the Robert Penn Warren Center for the Humanities. He is a past president of the Cervantes Society of America and author of Cervantes in the Middle: Realism and Reality in the Spanish Novel.

Excerpted from full article published in the e-book Guide to the Season’s Plays 2014-15, available for purchase for the Kindle or Nook.

Man of La Mancha plays Sidney Harman Hall through May 3.