Behind the Scenes: Gymnasia’s Costume

Did you know that the Shakespeare Theatre Company Costume Shop builds nearly all of the costumes that you see on our stages based on a two-dimensional costume rendering by the designer? A Funny Thing Happened on the Way to the Forum presented new challenges – like working with the stretchy, glitzy materials needed for the courtesans’ costumes.

The costume for Gymnasia, who will be played by Jennifer Frankel, was created by the three-person team of Denise Aitchison (Draper), Jen Biehl (First Hand) and Jennifer Rankin (Stitcher).

They started with this sketch by Forum’s Costume Designer, David C. Woolard: 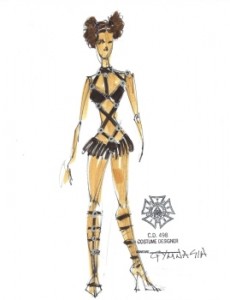 Denise met with David in September to discuss what he wanted and what she could create for a mock-up fitting approximately two weeks later. Mock ups are usually made out of muslin but for this costume Denise used broadcloth because it’s black and inexpensive. 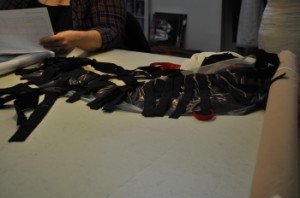 The mock up Denise created for the fitting.

After the mock-up fitting, the team had another two and a half weeks until the first real fitting with the actor. In that time, Denise made the pattern, trued (checked and corrected) it, then passed it along to the First Hand, Jen, who did the cutting.

Keeping all of the pieces of the costume organized was a challenge, because many of the strips looked similar. Jen labeled all of them, using letters to identify torso strapping and numbers for the top portion. She also marked seam allowances and stretch points. 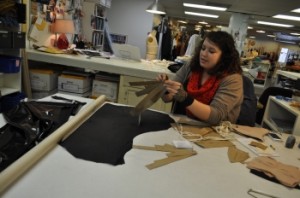 The pieces had to be cut expertly and precisely from one half hide of leather. Jen worked to be as economical as possible, to ensure that she would have some of the hide leftover. While the show is in tech, some pieces of the costume may need to be replaced due to wear and stretch. The bra, which was purchased premade, was covered in stretch patent leather material that matched the half hide.

Denise and Jen supervised the Stitcher, Jennifer, in tandem. Again, precision was crucial: leather can’t be restitched because it mars.

As with all costumes, Gymnasia’s was designed to withstand the rigors of two-performance days. Leather warms up as its being worn, they put cotton drill fabric on the back of each strip to create a barrier layer between the leather and the actor’s skin. They also added elastic at each connection point to keep the costume flexible as the actor moves around during the performance. 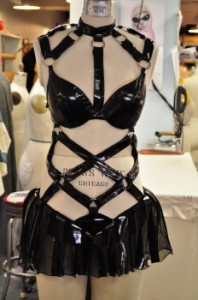 The costume in progress.