Better casting through chemistry, a look at Earnest’s male leads with The Washington Post Express

The following article was published in The Washington Post Express, January 23, 2014.

What makes ‘The Importance of Being Earnest’s’ cast perfect? Best friends as the leading men

Weeks before rehearsals began for the Shakespeare Theatre Company’s production of Oscar Wilde’s “The Importance of Being Earnest,” director Keith Baxter got a fortuitous phone call from actress Maggie Smith. 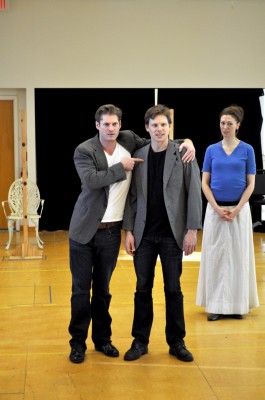 “I still needed a Miss Prism, and my great friend Maggie said, ‘Have you thought about Patricia Conolly?’?” Baxter says. “I hadn’t, but I knew she’d be perfect. It’s pretty good to have Maggie Smith as your casting agent, isn’t it?”

Apparently A-list thespians all have one another’s numbers on speed dial, because Baxter rang up Conolly and cast her forthwith.

With that final touch, Baxter felt he had an ideal cast, especially because his two lead actors, Anthony Roach (who plays Algernon Moncrieff) and Gregory Wooddell (Jack Worthing), are best friends in real life and in the play. “That chemistry is enormously important to driving the narrative forward,” Baxter says.

In a Capitol Hill salon, the two lead actors bantered like Wilde characters while getting their hair dyed a nearly matching blond for the play. Even before the dye job, they looked pretty similar, and, as it turns out, they live across the street from each other in Manhattan.

“It was weird,” Wooddell said. “Tony found out where I was living and —”

“I’m on the second floor, so I can’t quite look into his window,” Roach quipped.

“That’s when I got bars on my windows,” Wooddell said.

As their colorists transformed the two actors into Victorian playboys, we put their friendship to the test, “Newlywed Game”-style.

If Greg wanted to get out of a boring dinner like his character in the play, what excuse would he use?

Greg: That’s a good one. I’ll remember that.

Is Greg more earnest, meaning truthful, or is he more like Earnest the character — a big hypocrite?

Tony: He is. He just proposed to his girlfriend; nothing’s more earnest than that. He made an honest woman out of her.

If Greg owed money like his character, to whom would he owe it?

Tony: I wrote down “the Stolichnaya vodka company.”

If Tony had an alter ego like his character, what would it be?

Tony: I would be a private eye named Roberto.

Greg: I wrote down, “The Pimp of Venice.”

Tony: That is actually Roberto’s cover, being a pimp in Venice. No one suspects him.

If someone insulted Tony, how would he respond?

Tony: Naturally, I would have an instant witty quip with a double entendre that somehow insulted his heritage.

Tony: Keith would agree with that.

Which “Earnest” girl would Tony date: a Cecily or a Gwendolen?

Tony: A Cecily, because she is sweet and pure.

Greg: Both! Why choose?