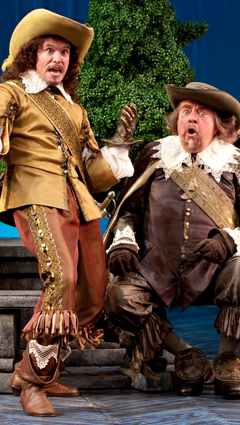 Photo of Christian Conn and David Sabin in The Liar (2010) by Scott Suchman.

Now that’s a puff line to put on a theatre marquee.

Consider these tidbits from the life of Jean-François Regnard: first, that as your average young man of 23 gadding about the world he was taken prisoner in 1778 by Algerian pirates, sold into slavery, did six months’ hard labor, got ransomed and when he arrived home hung his slave-chains on the wall in his Paris house. Second, that after a cushy Treasury job, he launched himself as a comic playwright at age 38 and became the Next Big Thing after Molière. Third, that after he’d been buried 125 years, some kids found his skeleton when his church was being renovated and used his skull as a projectile.

In other words, Regnard had an archetypal career as a playwright: a slave while alive, a football when dead. Add to this that he was beloved by all who knew him, that he made a great portion of his fortune on a gambling spree, and that, passing through Lapland, he caused a furor because of his uncontrollable laughter at a typical Lapp funeral. His name is cognate with renard, the French word for fox, and he lived up to it. “Il faut, par notre esprit, faire notre destin,” Crispin says in The Heir Apparent. “It’s with our wits that we create our fates.”

The buoyancy with which Regnard lived is so intrinsic to his art that the man and his work are one. The play at hand (from 1708, titled Le Légataire Universel) is worldly, utterly honest, satirical without being condemnatory, ofttimes bawdy, sometimes scatological, now and then macabre and it craves jokes as a drunkard craves his pint. Like a drunkard, the play will do anything to find the pint as Regnard goes off on knockabout detours hunting for laughs—not out of desperation but out of brio. Granted, some of Heir is a shameless rip-off of Molière’s Imaginary Invalid. But is there anything in the Malade Imaginaire to match Crispin’s (i.e., Regnard’s) inspired impersonations?

Because Regnard was writing as French classical theatre was heading into a century of much different character, the verse dialogue is more conversational than Molière, the concerns more bourgeois, while the farce is turned up (as they say in Spinal Tap) all the way to 11. One can draw a straight line from Légataire to Feydeau’s middle-class nightmares, and straight from there, or should I say down from there, to TV sitcoms. And what could be more up-to-date than his characters’ almost feral obsession with money? When Michael Kahn sent me Légataire to look at for possible adaptation for the Shakespeare Theatre, I had never heard of Regnard. Yet, just as when Michael had sent me Corneille’s Le Menteur two years previously (which became The Liar, which became Michael’s priceless production of last season, which turned out to be the most fun I ever had working on any play) I needed only a single reading to know I had to take on the piece. The off-color jokes made me howl even while I marveled at Regnard’s facility at rendering them in such graceful couplets.

How to bring the play into English? I took it as my job, while pruning some of his more extravagant asides, to mirror Regnard’s restless inventiveness and tumbling action. As with The Liar, I took my liberties. Among other things, I beefed up Isabelle and Madame Argante, both of whom disappear in the original for the bulk of the play. Geronte held such delicious comic possibilities I probably almost doubled his part. I extended the Geronte-versus-Eraste marriage complication and embellished the impersonations that are the play’s set pieces. Finally I attempted a more satisfying ending, since the original—like many French plays of that period—simply stops, abruptly, just when we expect a final cascade of unravelings and recognitions.

Working with (I won’t say “on”) Regnard has been a delight, for he’s been, as he was in life, the best of company. As Lady Mary Wortley Montagu said of Henry Fielding: “It is a pity he was not immortal, he was so formed for happiness.” Wouldn’t it be wonderful if Regnard could be raised from his tomb—not to be a plaything this time, but to take his rightful place in the English-speaking theatre as a natural master of comedy, for gaiety ran in his veins as his birthright.