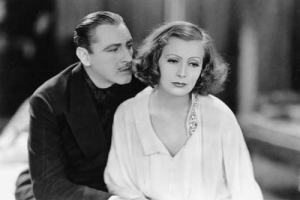 The lights rise on a decrepit hotel in the 1920s. If it feels like a somewhat familiar sight, you are not mistaken. Hotels have long provided a motivating background for drama. As scholar Douglas Tallack writes in his essay “’Waiting, Waiting’: The Hotel Lobby,” lobbies contain a combination of “movement and stasis.” This tension provides an ideal background for a colorful variety of stories.

In the 1930s cinema audiences were able to indulge in many of these hotel-set stories. In fact, the number of films with credited hotel clerks in film rose from 12 in the 1920s to 151 in the following decade. A Depression-era viewing audience without means for travel could live vicariously through the comings and goings of a wide variety of characters. In the highly successful 1932 film Grand Hotel, later turned into a Broadway musical, the lobby displayed a space where anything is possible. There is irony in Dr. Otternschlag’s reflection that despite the hotel’s comings and goings “nothing ever happens.” As the New York Times film critic Mordaunt Hall reflects: “the audience has seen manslaughter, gambling, a baron bent on stealing pearls, love affairs, a business deal, and various other doings.” In a hotel, a great deal can happen. Glamour and mystery enter with each opening of the large door. A new story is ready to start with each front desk check-in.

The cinema may have embraced the allure of hotel life, but theatre artists have frequently turned to the darker side of hotel storytelling. The mid-century is filled with theatrical narratives set in hotels, inns, boarding houses and, as the century came to a close, motel rooms. The stories seen onstage are not projecting a lifestyle of travel and glamour. In fact, frequently onstage we get the opposite story: one of immobility and loss.

Eugene O’Neill opens Hughie into this world. His opening stage direction describes the hotel as a “third class dump.” “It is one of those hotels,” he writes, “built in the decade 1900-1910 on the side streets of the Great White Way sector, which began as respectable second class but soon were forced to deteriorate in order to survive.” There will be no elegant travelers here only those who in a time of opulence cannot afford anything better. It is a hotel for the financially stuck and it can be assumed that those who walk in are not on an upward path. The Night Clerk has been trapped in his job so long he “can tell the time by the sounds in the street.”

Tallack notes that hotels are a gateway. They provide a path between the public world of the street and the private world of the room. The lobby is the conduit but even so it is not always an active space. As he writes, “it is also a place which some people do not pass through immediately, or at all. Instead, it becomes a place of waiting, even for those in a hurry.” There is a purgatorial despair found in hotels. Though some pass through there are always people who, like Erie and O’Neill’s Night Clerk, are trapped and unable to move on, waiting for something.

The hotel is meant to be a temporary space. It is not a home. Christopher Wixon remarks while discussing the brutal hotel play Blasted by Sarah Kane, “the hotel is a space of profound alienation.” Within the walls of the lobby or the even more confining corners of a hotel room, characters strain to maintain their humanity. Wixon goes on to say that in American drama “temporary spaces frequently embody the social marginalization and/or alienation of its characters.”

In Grand Hotel, Greta Garbo historically remarked, “I want to be alone.” The hotel, divorced from the sturdiness of a home, can be open to the crashes of colliding worlds, secret romances and double dealings. It can also function as a place for profound loneliness. In Hughie, Erie enters, talks to the Night Clerk and exits. People come and people go. Nothing ever changes.

A short collection of hotel plays:

Hannah J. Hessel, STC’s Audience Enrichment Manager, is in her second season at STC and holds an MFA in Dramaturgy from Columbia University.