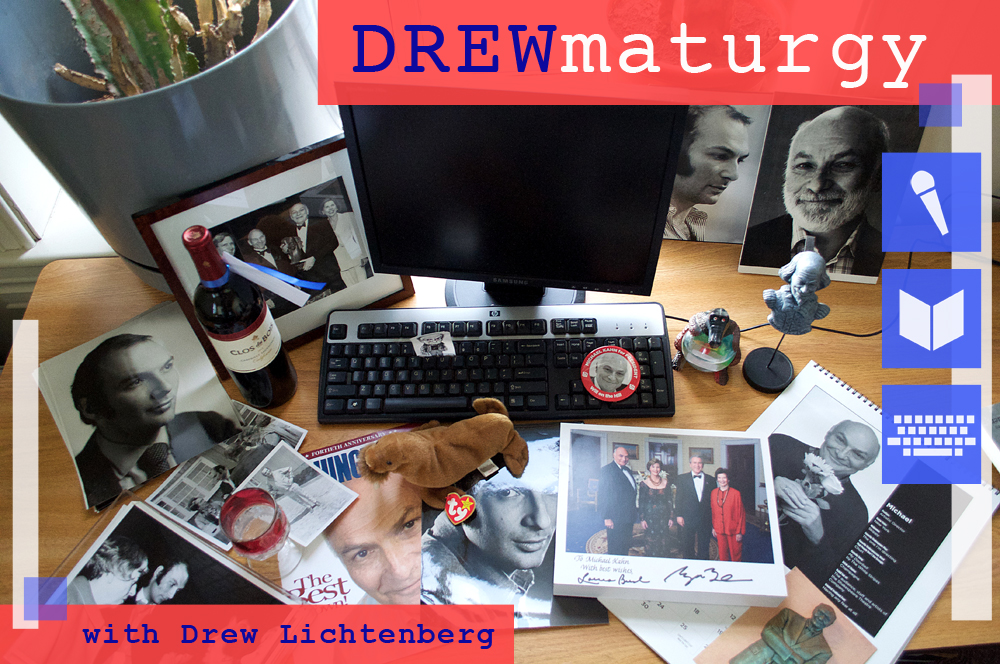 Last week was the first week of rehearsals for The Critic and The Real Inspector Hound, directed by our estimable Artistic Director, Michael Kahn. Michael’s shows are always special, for a simple reason: Michael is special. He’s a true legend in the field; one of the pivotal figures in the regional theatre movement of the 20th century, he’s been doing this forever, knows seemingly everyone, and has a spate of incredible stories.

For example—Michael once told me that he owed his career to three people who took a chance on him: the first was the playwright Edward Albee, who produced Michael’s first play when he was still a Columbia student (it was Adrienne Kennedy’s Funnyhouse of a Negro at the Cherry Lane, one of the founding documents of the off-off-Broadway movement); the second was Joseph Papp, artistic director of the Public Theater, who asked Michael to direct a Shakespeare production in Central Park when he was a young,

unknown, downtown director; the third was the great John Houseman, Orson Welles’s former business partner, who asked Michael to join the faculty at the fledgling Juilliard conservatory. To me, these are figures etched in legendary white marble. To Michael, they are people who gave him his big breaks.

And then there was the time I mentioned I had been given an edition of Thornton Wilder’s Letters, and Michael told me he was in it. Or the photos of Michael and Elizabeth Ashley and Tennessee Williams working on Cat on a Hot Tin Roof in the 1970s. Michael was bearded then, but he looks exactly the same.

Anyway, on a Michael show, the actors invariably will be masters of their craft, some of whom are veterans at working with Michael, some of whom were his students at Juilliard 40 years ago and haven’t worked with him since, some of whom have wanted to work with him for just as many years and only now are getting the chance. Last year on The Metromaniacs, Michael worked with Adam Lefevre for the first time, and it was a marriage made in heaven.

It makes for an interesting mix. On the first day of rehearsal, everyone will have that unusually alert quality that actors have in a rehearsal room: bright eyes, bursts of excited laughter, eager taking of notes. (It is very important not to say the wrong thing during this period, a lesson I have learned the hard way.) On a normal show, the nervous energy dissipates after a couple of days of work on the material, but not on Michael shows. It remains. For six weeks. Like I said, Michael shows are special.

In fact, Michael exerts such a charismatic pull on the minds of those who work in the Shakespeare Theatre that it’s not unusual for artists working on non-Michael shows to be on edge when he’s not even in the room. I remember a show in which one director spoke of a dream he had the night before first rehearsal of Michael walking into the room, except that his head had been replaced by a lion. Everyone nodded gravely, silently. They had had that dream, too.

The funny thing is, Michael is a dream to work with, and his shows are always the most laid back experiences. He sits, always with the same mug of tea—it has a picture of his face on it, smiling broadly, holding an enormous sunflower—and, without even looking down at his script, proceeds to pin down the storytelling beats of the show with eerie precision. It’s often said that good directors can work as their own dramaturgs, and with Michael it’s certainly true. I learn a great deal just from watching him work.

For instance, after we did our first read of The Real Inspector Hound, one of the actors mentioned that the play only made sense if they performed their character as an insane person imitating a sane one. (The plot of the play-within-a-play is about an escaped madman who may or may not ever show up.) This kind of conversation often happens during tablework. An actor will chime in: “I thought this line meant that I was doing this,” and then another will pipe up, and before you know it, the show doesn’t make any sense. Very calmly, Michael enumerated the possible choices that could be made. After reading it a couple different ways—they tried insane but playing sane, then sane but just deeply confused, but neither choice was particularly clarifying. Finally, Michael said: “OK, maybe you’re insane, but you are an insane person who’s good at acting.” The scene suddenly had just the right injection of Stoppardian ambiguity.

Another fun part of the tablework process comes from the side conversations that a dramaturg will have with specific actors in the show. There’s always one or two actors per show who are really eager to pigeonhole and interrogate me about something. Last year on The Tempest, Clifton Duncan, who played Caliban, wanted me to find research on the history of slavery (fair enough), whereas Ted van Griethuysen wanted to know where the philosophy in Gonzalo’s speeches came from (Montaigne’s essays). Most of the time, you can be prepared by doing your homework before the first day, but sometimes actors will surprise you with a question out of left field.

For instance, one of the stars of this show is Robert Stanton, who plays Mr. Puff in The Critic and Moon in The Real Inspector Hound. Robert was outstanding as Charles Marsden in Michael’s 2011-12 production of Strange Interlude, and he possesses an assiduous intelligence that can turn voracious. I remember on Strange Interlude he read both 900-page O’Neill biographies written by the Gelbs, and then read two more! He is a sponge for knowledge, a dramaturg’s nightmare, perhaps, but a delightful one.

Anyway, on day one, at Meet the Cast, Robert asked me backstage: “Is Moon a post-structuralist thinker?” He had been grappling with the second-string critic’s steam of somewhat pompous verbiage, which is filled with language about symbolism. He was thinking that Moon had read a bunch of Lacan and Ferdinand de Saussure. Not thinking much of it, I somewhat glibly replied that if Moon was anything, he was a Sartrean existentialist. On day two, Robert showed up and asked me for lunch. He read Sartre’s Being and Nothingness over the night, of course, and had developed a theory of the characters as Sartrean avatars: Birdboot was obviously a person who lives in “bad faith,” one who defines himself socially, whereas Moon was an example of alienated Sartrean man, consumed with how he appeared in the eyes of others. The Real Inspector Hound, meanwhile, represented the chimerical notion of the “free man,” he who both is and is not.

I stammered that while this was all interesting, I hadn’t read my Sartre recently. This is what I mean about saying the wrong thing.

In any event, Robert wrote to Tom Stoppard’s assistant for clarification. Here was the reply from Tom himself: “Dear Robert […] I don’t think Moon knows what structuralism is or existentialism. I wrote the first sketch of the play in the early sixties, so I probably didn’t know either. Moon sees himself as a certain kind of critic, and makes the appropriate noises, it’s more to do with mimicry than original thought. […] All the best, and please convey my thanks and good wishes to the company. Tom.”

As with Michael’s navigation of the sane-insane dilemma, the lesson was the same: in the theatre, sometimes the choice that makes both paths available to the audience is the richest one.

We hope you enjoyed Drew’s last post of the year. Check back in with us in a few weeks to read more Drewmaturgy and to see how Drew’s desk has changed in the new year! (Maybe he’ll have a resolution to be tidier. . . but, really, what’s the fun in that?)