Drewmaturgy: Look out old Bertie’s back! 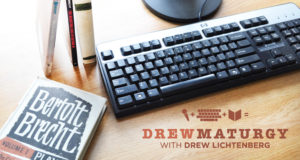 This week, Drew continues on his quest to convince us all that Brecht is the playwright for our times. Below, he shows us why the fourth and fifth arguments against Brecht don’t hold water. Catch up on points one through three in the last Drewmaturgy.

Ah, yes, the infamous “alienation effect,” which is what most people remember of Brecht from cursory discussions in high school or college theatre class. The actual German word is a Brechtian neologism, the Verfremdungseffekt, which is perhaps better translated literally: “the make-strange effect.” If Brecht was interested in getting us to understand ourselves and our surroundings as shaped by forces that remain all but invisible to us most of the time, what better way than by distorting them, exaggerating them, distancing them? In other words, by making them strange? Brecht did not want to “alienate” us in the English sense of the word—to estrange our emotions. In fact, he was keenly interested in provoking an emotional response to his work, a response like the STC audience had to Arturo Ui.

Brecht’s friend, the great critic Walter Benjamin, put it better than I can: “The art of [Brecht’s] epic theatre consists in producing astonishment rather than empathy. To put it succinctly: instead of identifying with the characters, the audience should be educated to be astonished at the circumstances under which they function.” By taking things that should seem obvious and making them seem strange, Brecht pleasures us into a perverse kind of knowledge. We come to see the world that we live in, the one that extends beyond the theatre’s fourth wall, as absurd, grotesque, startling, horrific, a far stranger fiction than anything he could dream up onstage. Brecht suggests an entirely new purpose for theatre. To paraphrase the critic Darko Suvin, Brecht’s aesthetics are both a new theory of man’s reality in the world, and a new theory of art as a means of understanding reality.

So what reality was it that Brecht was writing about, and why does it still resonate? Stop me if this sounds familiar. Brecht was writing in a time of mass advertisements and financial deregulation, a time of economic crashes and financial inequalities leading to scary waves of populist movements and a resulting distrust of ethnic outsiders and immigrants. In Brecht’s time, technological advancements and innovations such as radio and the cinema made it possible for politicians to directly bypass traditional institutions and gatekeepers and broadcast their own propagandistic takes on reality. Most of all, Brecht lived in an era when reality was becoming progressively more and more theatricalized, where the public arena came to seem like a kind of distorted reality show, one of celebrity politicians relying on their electrifying charisma (which is to say, theatrical presence), bypassing the truth in favor of delivering an overwhelming aesthetic shock to increasingly fanatical followers. (One of the most resonant ironies about Brecht’s theatre, which uses the theatre to give us a new perspective on reality, is that it warns us not to confuse reality in turn for the theatre.)

Perhaps the biggest reason why Brecht has never gotten his due in America has more to do with us than with him. He spent most of the late 1930s and 1940s on the run from Hitler, a political refugee waiting for a visa to come to America. When he finally got here, his works were rejected by Broadway and Hollywood producers, leery of alienating business interests in Germany. Before returning to Germany, he was eventually forced to testify in front of McCarthy’s House Un-American Activities Committee, even though he had never been a formal member of the Communist Party. (His testimony is a masterpiece of Shakespearean equivocation.) American theatre—and reality—have never really had a need for a Brechtian theatre. We have always understood exactly who we are and what kind of country we live in. The response to last month’s reading—and the results of its election—suggest that all of a sudden, that may have changed.