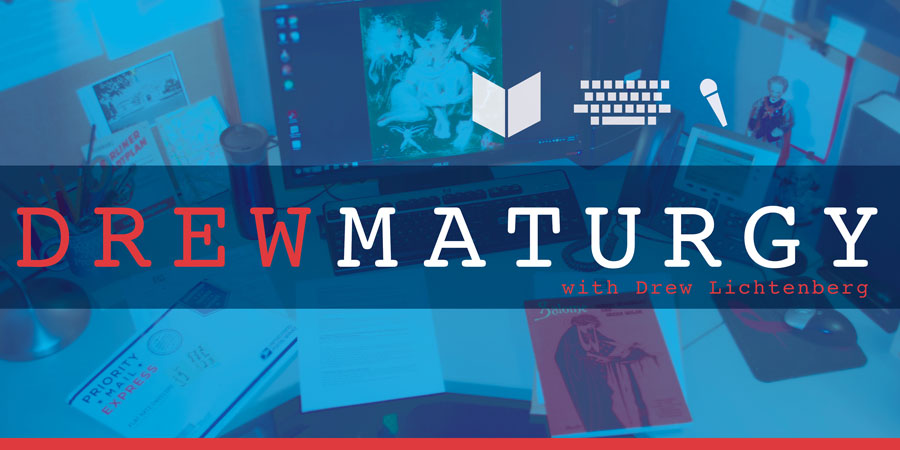 Ahh, the season. So many events in our lives, as worker bees in the humdrum hivemind of the American regional theatre, revolve around the season. At almost every point in the year, in nonprofit offices around the country, there will be groups of theatre people getting coffee and discussing the season, arguing about the season, taking stands on the season. It is our salvation and our penance, our alpha and our omega, our sursum corda and our shalom.

American regional theatres produce six shows a year (sometimes even less, as I’ve seen seasons of five, four, even three shows become commonplace). As a result, a season has to manage the tricky, nimble feat of continuing to serve their respective theatre’s broadest possible audience with each show as well as its subscriber base, rewarding those who are loyal while also drawing in new audiences, reminding people why they love shows at [fill-in-the-blank theatre] while also finding creative, surprising, illuminating ways of challenging them to reinspect the way they think about the parent institution. If we can also get them to think in a new way about what the theatre can do, or even how they understand themselves and their world, even better.

If this sounds, like an impossible job: it is. How can a theatre be both old and new, innovative and traditional, reaching out broadly but also sheltering warmly, and all at the same time? I don’t know. One thing I have learned, however, is that the season functions as an ever-changing face of an institution’s identity. This is why season announcements have become increasingly fraught politically in recent years. As artistic directors have become increasingly mindful of representation, audiences have become increasingly vocal about seasons filled with plays by old white men.

Let’s take a look at the seasons over my five years at STC and see if we can draw some conclusions, with some follow-up thoughts on next year’s season:

I will always associate my first season with Michael Kahn’s epic production of Eugene O’Neill’s Strange Interlude, a two-intermission, four-plus-hour epic that transported me back to the 1927 epoch of Alfred Lunt and Lynn Fontaine, offering a rare glimpse of a titan of American drama at his Promethean zenith. We also did two very funny productions: David Ives’s The Heir Apparent and Christopher Bayes’ commedia dell’ arte-infused The Servant of Two Masters, for which Stephen Epp won a Helen Hayes Award. (True story: STC was in plans to bring over the National Theatre’s One Man, Two Guv’nors but Michael decided that one adaptation of Goldoni’s play was enough.) In terms of Shakespeares, the season paired Ethan McSweeny’s Cuban-set production of Much Ado About Nothing with less frequently produces works such as The Two Gentlemen of Verona and The Merry Wives of Windsor. Whereas Much Ado gets produced very often, audiences rarely get to see the other two.

It was one of the thrills of my professional life to start work on The Winter’s Tale with Rebecca Taichman at the McCarter Theate; the production remains one of my all-time favorites, by turns funny, devastating, and bittersweet, highlighting all the qualities of that play. (I had detested The Winter’s Tale before working on it, and now it’s one of my favorite Shakespeare plays.) Other seeds planted here continue to bear fruit for STC. Jeffrey Hatcher’s hilarious adaptation of Gogol’s The Government Inspector led to years of talks between us, culminating in this season’s adaptation of The Critic, and Ethan’s production of A Midsummer Night’s Dream just traveled to the Macao Festival of Arts off mainland China, the first time STC has sent a show to the Far East. Wallenstein-Coriolanus was a political rep fit for the wonkiest of wonks, though it was a tough sell for general audiences. O’Neill’s Hughie (in a stellar production by Doug Hughes starring Richard Schiff) taught us that if we’re going to do an evening of one-acts, we should do at least two of them.

A big change, with A Funny Thing Happened on the Way to the Forum, STC’s first all-out musical, a controversial decision to some. And to me at first. But I remember sitting and watching the Charlie Brown-inspired costumes, the production’s evocation of a technicolor, MAD Magazine 50s era that was some 60 years in the past, and it struck me: for a lot of people who grew up with Sondheim cast albums, this is classical theatre. Jonathan Munby directed a racy Measure for Measure, set in a licentious pre-fascist Germany, which divided audiences who found it graphic.

The rest of the season, however, was all killer, no filler. Along with Sondheim, we produced the most surefire titles by Wilde (Importance of Being Earnest) and Coward (Private Lives). Michael directed Stacy Keach’s Falstaff in Henry IV, Parts 1 and 2. (It was fascinating to work on Part 2, a comparatively autumnal, somber piece that confronts death and dying). After two seasons where we had tried various things—O’Neill one acts, thorny political plays, lesser-known works by the Bard—this was a season of populism, recognizing what constitutes classical theatre to many in our audience. Having started this conversation, the season allowed us a firm base to expand it going forward.

A great season, studded with successes both popular and critical. Ethan Mcsweeny’s production of The Tempest, his third Shakespeare in the Harman, was in my opinion his finest, blending spectacle and language, comedy and serious drama expertly. The Metromaniacs, the third in the “David Ives trilogy,” was a project we had been working on ever since The Heir Apparent back in 2011, and a true ReDiscovery, a play never before translated into English. It was hilarious, theatrically virtuosic, and smart, the kind of show that only STC could do. (It also was perfectly timed, with its Some Like It Hot overtones and playful intimations of gay marriage, for 2014, the year of the Obergefell v. Hodges decision, a point lost on not a single member of our Washington audience.) Alan Paul, who had helmed Forum with success, outdid himself with an impressive concept for Man of La Mancha. Setting it in a jail and emphasizing the text’s early-60s, avant-garde elements, the piece took full advantage of the Harman and grounded its sometimes flighty idealism in a gritty reality.

The National Theatre of Scotland’s production of David Greig’s Dunsinane proved that we could bring foreign companies into our season, and also premiere new plays on classical themes. Michael Attenborough’s As You Like It was an object lesson to me in how personal theatre is. Michael’s father, Sir Richard, had just died before rehearsals, and Shakespeare’s comedy became one saturated in mourning and melancholy. Audiences were befuddled, perhaps, but I knew the bigger story. And Dominique Serrand’s Tartuffe proved how shocking Molière still is, much to the surprise of some of our audiences, who came expecting light French farce.

I’m biased, but in my opinion our winning streak continued this year. We took even more artistic risks, taking on Middle Eastern themes in Yaël Farber’s (controversial, award-nominated) Salomé and Ron Daniels’ Othello. Ed Sylvanus Iskandar’s current production of The Taming of the Shrew, on the other hand, is sure to provoke conversations about sexual, racial, and gender identity. Headlong’s bloody, Brechtian 1984 played to sold-out houses, proving that audiences are the opposite of allergic to political and experimental theatre. For those with different tastes, we still did knockdown entertainment as well as anybody, with Michael’s “in-the-theater” evening of critics and hounds proving to be a work of invigorating screwball intellectualism, and Alan’s Kiss Me, Kate reworking and expanding Cole Porter’s score with diversity in mind.

And so we’ve arrived at next season, which brings me (finally) to my point. If you look back on our season from five years ago, we have subtly migrated our identity to become a subtly different kind of institution. We’ve transitioned from three Shakespeares per season to two plus a musical, reflecting a shift in audience tastes. We’ve expanded our directors from English gentlemen (Messrs. Michael Attenborough, Jonathan Munby, and Keith Baxter, to name a few), bringing in artists and groups from around the world, whether South African (Yaël Farber), English (Headlong), or Scottish (David Greig and the National Theatre of Scotland).

Perhaps most importantly, by producing musicals and new works such as Salomé and Dunsinane, we’ve begun to open up the question of what classical theatre actually is and what it means to people. The latter two notably shifted the conversation to political realities and omissions from the historical narrative. A girl in ancient Judaea. Macbeth’s wife, given back the name (Gruoch) that Shakespeare denied her. We’ve thought hard about how to include the very people who always get left out by the formation of the classical canon.

I like to think of this coming season as a synthesis of our populist and innovative strands. Depending on how you look at it, of course, it can be one or the other. On the one hand, it’s a very broad, populist season, with perennial Shakespeare titles such as Romeo and Juliet and Macbeth sharing the stage with a beloved children’s story/musical (The Secret Garden), an adaptation of a work by none other than Hemingway (The Sun Also Rises), a West End blockbuster (Mike Bartlett’s King Charles III), and David Ives (The School for Lies).

From another angle, however, it’s an innovative, even risky season, with Alan Paul and Liesl Tommy (like Yaël Farber, a South African director) taking on the Shakespeares. As we did last year, we are producing a work by a living, female playwright (Marsha Norman, The Secret Garden), and bringing in a group, Elevator Repair Service (a key influence on Headlong) who are known for their literary adaptations. Like Dunsinane, King Charles III is a classical “response” play (in this case, to Shakespeare’s histories) sure to divide opinion both aesthetically and politically. And The School for Lies is David at his spikiest, ruffling Molière’s feathers as much as smoothing them.

Have we succeeded in doing the impossible, in being everything to everyone in six titles? I have no idea. I guess we’ll know a year from now, when it’s time to get to work on the next season. As history shows, though, I’m confident we will continue changing and evolving, in concert with our audiences.