DREWMATURGY: Sheer Cloudy Vagueness, or, the Scourge of the Orwellian 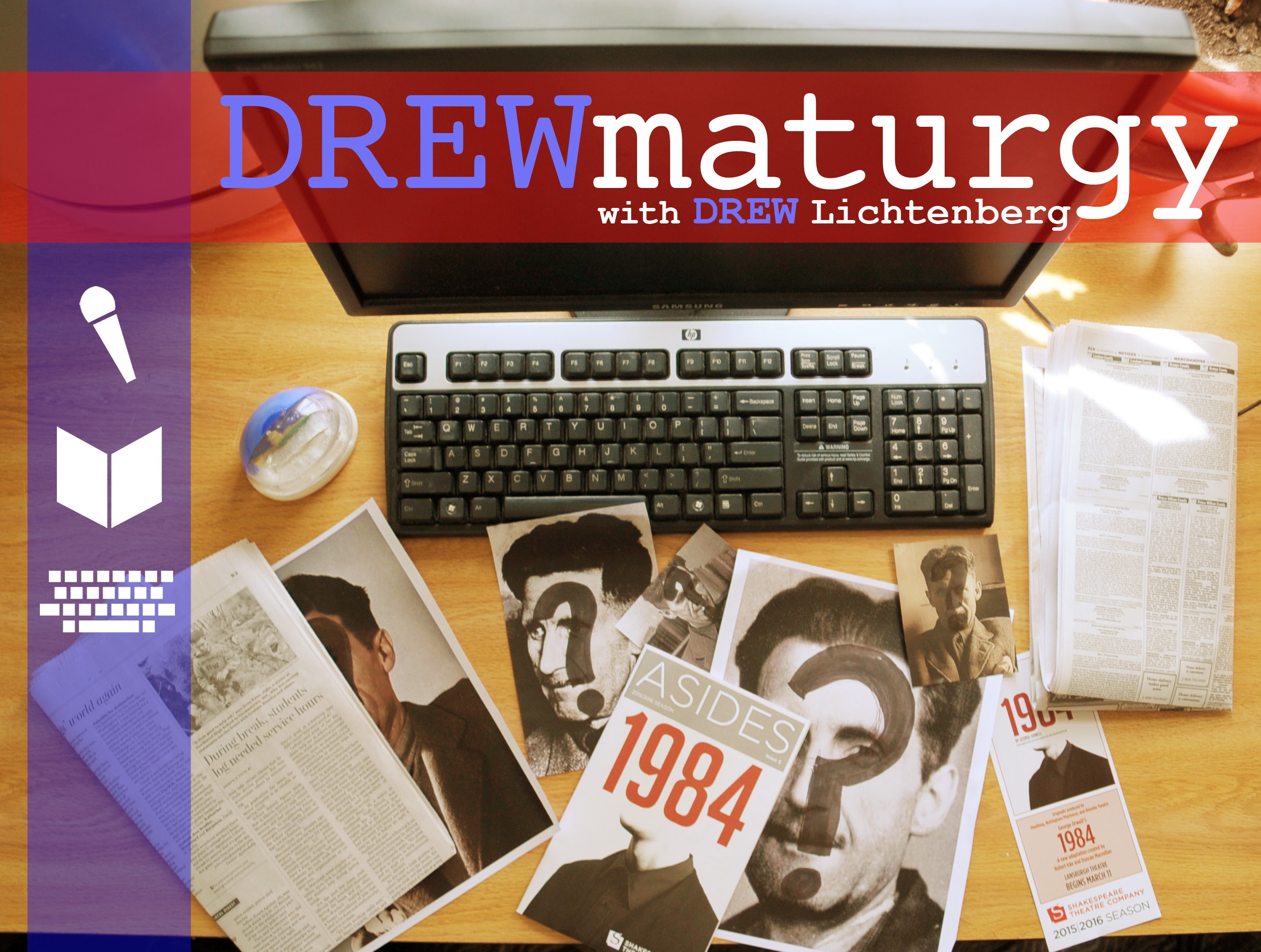 Sheer Cloudy Vagueness, or, the Scourge of the Orwellian
By Drew Lichtenberg

One of the weird quirks about our season model at Shakespeare Theatre is the “international presentation.” Over the past five seasons—since I’ve been here—we have presented Dunsinane and Black Watch by the National Theatre of Scotland, Kneehigh’s Brief Encounter, Mies Julie from South Africa’s Market Theatre, and many more, including (just before I got here) the National Theatre’s production of Racine’s Phèdre, starring Dame Helen Mirren. This year’s presentation was an adaptation of George Orwell’s 1984 by Headlong, a London-based theatre company known for “re-interrogating” works that have become bedrocks of English literature. The company’s first work under then artistic director Rupert Goold was Milton’s Paradise Lost, a text which—like Orwell’s novel—is often found on the required high school reading list.

Because these are productions that arrive fully-formed, I don’t get the chance to work on them as a dramaturg or even write a program note for them. Usually, two-thirds of the way through the season, having worked on four productions already, this is a great relief. This production of 1984, however, left me with a great deal of food for thought, and I was asked to host a panel on an AsidesLive symposium a few weekends ago, which gave me more.

My panel was the “Ministry of Peace,” and my guests and I were tasked with tackling the thorny topic of Orwell’s influence on literature and society. It’s a funny thing. We all think we know Orwell and his work very well, but he remains an elusive, slippery figure. The panel basically agreed that his influence is so vast on not just literature but all of the English-speaking world that it is practically incalculable, yet we were all just as unable to provide concrete proof of his influence, to quantify it in a scholarly manner. One can sense Orwell in everything we read and say (and God knows he’s invoked constantly by editorializing columnists every day), but there remains the nagging sense of the “other Orwell,” the real Orwell, the one who actually lives on the page, in his works, which always catches people by surprise.

In the next panel, the actors in Headlong testified to this phenomenon, relating vivid accounts of audiences scandalized by their production. The most aggrieved would invariably accuse the actors of making stuff up from the source material. This can’t be Orwell, the thinking seems to go, he couldn’t have written such things, at least not my Orwell!

This brings me back to a rule of thumb I always use when working on a show: a direct encounter with the artistic object itself will always lead to something surprising. Of course, this is true of all works of art, not just of Orwell. The great joy in working on Shakespeare texts is getting the chance to look beyond the famous lines or to see them in context, to encounter the un-famous Shakespeare. In doing so, of course, one gains a new appreciation for the complexity of his creation, for why he is as famous as he is. This is why I’m very distrustful of any pedagogy which encourages dramaturgs (or directors, or actors) to dive into secondary research in order to “understand” the art through the “context” of the world in which it was made. Secondary research can be tremendously helpful and inform a production profoundly, but if you skip over the primal encounter with the artwork itself, it can obscure as much as it can reveal.

Talk turned, as it often does when Orwell is the subject, to that portmanteau term “the Orwellian.” Andrew N. Rubin, of Georgetown University, my distinguished guest and one of the foremost Orwell scholars, described the term as a “dying metaphor,” likening it to a kind of “Newspeak,” the utopian non-language in the world of 1984 that seeks to purge all negative words from the English language. I know what he means. Like other coinages of author’s names—“Kafkaesque,” “Beckettian,” “Dickensian,” “Shakespearean”—“Orwellian” is a word that has been gradually emptied of its own semantic meaning, an adjective meant to be synonymous with the experience of that author’s work that paradoxically renders the experience of that author’s work opaque, obscure, hidden beneath a linguistic veneer. One of my pet peeves in theatre reviews is the word “Chekhovian.” It is mercilessly abused as a kind of shorthand connoting quality. Rather than actually engaging with the artwork itself and attempting to describe what it is doing aesthetically, the critics will fall back on the laziest kinds of writing: assertion and obfuscation. (Next time you read a theatre review replace “Chekhovian” with “good because I say it is;” you will be amazed.) This doesn’t just bother me because it’s bad and lazy writing; it bothers me because it distorts and ruins the experience of Chekhov. It replaces Chekhov (or Shakespeare) with “Chekhov,” and we only get further away from the experience of the work itself.

Orwell was aware of these problems, indeed he is our writer most obsessed with language and its deleterious uses. In his celebrated essay, “Politics and the English Language,” written just before he started work on 1984, Orwell writes: “In our time, political speech and writing are largely the defense of the indefensible […] political language has to consist largely of euphemism, question-begging, and sheer cloudy vagueness. Defenseless villages are bombarded […] this is called pacification; millions of peasants are robbed of their farms […] this is called transfer of population; people are imprisoned for years without trial […] this is called elimination of unreliable elements.” There is a similar quote from 1984, used by Headlong in this production: “Power is power over people, yes, over the body, but above all, over the mind. Power over external, objective reality is not important. Reality is inside the skull.” What Orwell understood was that language, an imperfect system of signs created by humans, could be used to alter the map of reality both inside and outside people’s heads. Orwell’s interest in language is what makes him simultaneously ever-relevant and difficult to define in terms of influence.

One could say that 1984 is a novel first and foremost about language and its abuse, about writing and its erasure. After all, the story is about Winston Smith, a writer writing a diary that he never finishes, who discovers another writer’s work (Goldstein’s book) that never he never finished reading. We all are also starting a novel that will never get finished, participating in this act of writing and erasure. People always want to jump to the political with Orwell, to identify a real-world parallel with Big Brother and Winston Smith. The answer, of course, is that we are Big Brother. We are also Winston Smith.

The panel ended with Rubin making perhaps the most provocative point in a morning filled with many: that Orwell, who so many see as a prophet, is actually quite bad at predicting the future. “Orwell,” he said, and I’m paraphrasing, “actually keeps us from understanding our own world, if we constantly seek to evoke or to find the Orwellian. He isn’t interested in our world. He was an artist writing a work of fiction. Only by paying attention to the aesthetic world he’s setting up can we begin to figure out what he was on about.” Amen.

As Andrew pointed out, in the all-important Appendix of 1984 (written by Orwell, not inserted by an editor), the narrator, seeking to set out the principles of Newspeak, notes that the works that have proven un-translatable in the non-language are the very works that Headlong set out to re-interrogate: Milton, Shakespeare, Dickens. In his dystopia, so often seen as political prophecy, Orwell the artist gives artists the power to save the world. If only Orwellian meant that.