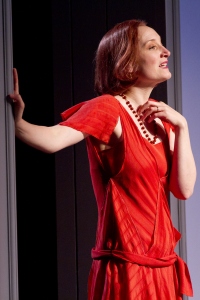 Last season, the Shakespeare Theatre Company staged Eugene O’Neill’s Strange Interlude. As Michael Kahn wrote in his blog for DC Theatre Scene, “the play is concerned with some of the deepest themes in modern American life”:

In its own way, Strange Interlude is a story of the American dream […] What is happiness? O’Neill never answers that question, but he does show us all the internal turmoil of the search.

As he did in Strange Interlude, O’Neill experiments with dramatic form in Hughie to focus on inner conflict, what Michael described as “the internal turmoil” of its characters’ search for happiness.

In Hughie, O’Neill gives Erie Smith a number of long, show-stopping monologues in which he tells sadly true stories about his dead friend Hughie—and exaggerated stories of his own gambling prowess. But what gives the role its extraordinary complexity is the manner in which O’Neill leaves Erie’s innermost thoughts unspoken, implying them artfully through his sly evasions and uncertain ellipses. At a telling instance late in the play, Erie has told another one of his customary whoppers, about his acquaintance with the famous gambler Arnold Rothstein. In a stage direction, O’Neill shows us Erie’s true nature: his fear of being caught in a lie.

He darts a quick glance at the CLERK’s face and begins to hedge warily. But he needn’t. The CLERK sees him now as the Gambler in 492, the Friend of Arnold Rothstein and nothing is incredible. ERIE goes on.

The moment is a silent play in miniature: the beginning, middle and end of an action, proceeding from uncertainty to resolution and tragic denouement.

Hughie’s frequent and detailed stage directions recall Strange Interlude’s “thought asides” and point to a presiding obsession in O’Neill’s experimentation with dramatic form. Strange Interlude’s “asides” and Hughie’s novelistic stage directions are both O’Neill’s attempts at creating a dramatic language for inner thought, a means of communicating his characters’ roiling inner lives through external artifice. Earlier in his career, he had used Greek masks in The Great God Brown and expressionistic devices in plays such as The Emperor Jones and The Iceman Cometh. It is a mark of O’Neill’s maturity and virtuosity at the end of his career that he trusted so completely in using simple silences rather than showy stratagems.

Consider this passage from Hughie, in which O’Neill shows us the Night Clerk’s thoughts:

The CLERK’s mind remains in the street to greet the noise of a far-off El train. Its approach is pleasantly like a memory of hope; then it roars and rocks and rattles past the nearby corner, and the noise pleasantly deafens memory; then it recedes and dies, and there is something melancholy about that. But there is hope.

Compare to this passage, from Strange Interlude:

MARSDEN: (thinking) Poor old Charlie! … damn it, what am I to her? … her old dog who’s lost his mother? … Mother hated her … no, poor dear Mother was so sweet, she never hated anyone … she simply disapproved … (aloud, coldly) I’m all right, Nina. Quite all right now, thank you. I apologize for making a scene.

Clearly the former are different than the latter. The Night Clerk, often considered a supporting role to Erie Smith, is given an internal world as rich and complicated as Erie’s silences and evasions. Strange Interlude’s tortured syntax becomes, in Hughie, a Proustian stream of thought and feeling. By the end of his career, O’Neill had given up on trying to transform live theatre practice and was writing now for an audience only of the mind. It freed his writing from melodramatic impulses, while preserving his characters’ “internal turmoil,” their endless seesaw battle between hopes and dreams on the one hand and dim reality on the other.

One of the lessons we learned while working on Strange Interlude is that the asides are integral to the play. They add dramatic conflict, bolstering the weight of the spoken “dialogue.” Hughie, a play with a similar lack of external conflict, has an equally rich subterranean texture.

O’Neill, writing in 1941, set Hughie in 1928. It was the year Arnold Rothstein was assassinated. It was the last year of high-tide living in New York before the financial crash and the Great Depression. It was also the year that Eugene O’Neill had his greatest commercial success, with Strange Interlude. One has to wonder: did he look to Strange Interlude as a model for Hughie, a play so seemingly different and yet so surprisingly similar?

Drew Lichtenberg is the Literary Associate at STC and production dramaturg for Hughie. He holds an MFA in Dramaturgy and Dramatic Criticism from Yale School of Drama.