Over the course of more than 400 years, both parts of Henry IV have remained a living part of our cultural vocabulary. In times of no theatre and in an era of film and literary adaptation, artists have found these plays to be an inexhaustible source of inspiration. Whether focusing on the tavern scenes of the jolly fat knight Falstaff, the coming-of-age of the young Prince Hal, the court scenes of King Henry, which focus on the responsibilities of rulership, or on the richness of medieval England itself, as seen in Hotspur’s Welsh and Scot-assisted rebellion, these plays contain seemingly all of Shakespeare’s creation. 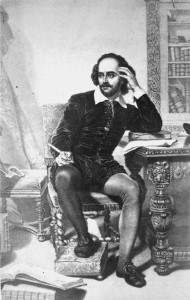 Shakespeare’s Lifetime
Henry IV, Parts 1 and 2 were most likely performed in between 1596 and 1598. In fact, Part 2 may have been the final play performed by Shakespeare’s troupe, the Lord Chamberlain’s Men, at The Theatre in Shoreditch before their eviction. In 1599, after a dispute with their landlord, the troupe was forced to sneak into The Theatre in the dead of night and dismantle the stage. Carrying the lumber to the South Bank of the Thames, they built a new theatre there, which they christened The Globe.

Without the success of the Henry IV plays, in particular Part 1, the company might not have survived. Part 1 was published in 1598, and it would appear in nine volumes, making it the best-selling of Shakespeare’s plays, and one of the most reprinted plays of the period. It has remained on stages, almost without interruption, ever since. 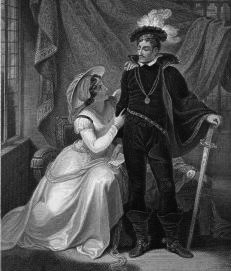 The Restoration and 18th Century
During the Interregnum, when all theatre was banned, an adaptation of the Falstaff scenes was performed under the title The Bouncing Knight. After the Restoration, famous actor-manager Thomas Betterton took the role of Hotspur in 1682, and played Falstaff in 1700. Unlike his contemporaries, Betterton left Shakespeare’s work mostly intact, barely touching the Falstaff scenes, which have frequently been censored by puritanical minds.

In 1815, actor-manager William Macready took on the role of Hotspur and did not relinquish it for 32 years. His volatile, dignified portrayal shifted the focus of the play to historical events. Charles Kemble’s 1824 production at Covent Garden continued this trend by maintaining a strict authenticity in sets and costumes. In the Victorian era, Herbert Beerbohm Tree staged Part 1 without any cuts, as part of the antiquarian trend.

Cycles
The two parts of Henry IV were not performed together Sir Barry Jackson united them for Shakespeare’s birthday in 1921. In 1935, the opening of the New Memorial Theatre in Stratford was the occasion for a similar combination, with Edward, Prince of Wales, flying in to be in attendance. In 1951, Anthony Quayle directed the “Henriad”: Richard II, both parts of Henry IV and Henry V, with all four plays sharing a single set. Then-unknown Welsh actor, Richard Burton, played Prince Hal. Perhaps more famous are the TV adaptations of the plays, produced by the BBC. The first was An Age of Kings (1960), a miniseries spanning Richard II to Richard III with an appearance by a young Sean Connery as Hotspur. More recently, The Hollow Crown series (2012) featured a star studded cast, including Tom Hiddleston as Hal, Jeremy Irons as King Henry and Simon Russell Beale as Falstaff.

Other Notable Productions of the Past Century
In 1945 at the Old Vic in London, John Burrell directed Laurence Olivier as Hotspur, Ralph Richardson as Falstaff, Nicholas Hannen as King Henry and Michael Ware as Hal in a production that gave equal weight to court and tavern scenes. In 1968 at the Delacorte Theatre in Central Park, Stacy Keach played Falstaff as an innocent man who believed his own lies, inspiring the New York Times to write, “He has not corrupted Prince Hal; Hal has corrupted him.” Gus Van Sant’s film My Own Private Idaho (1991), starring River Phoenix and Keanu Reeves, is a more loosely based modern-day adaptation setting the characters among homeless drifters in Portland, Oregon. 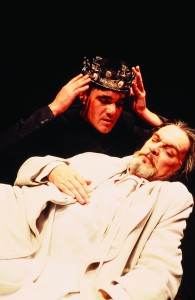 Adaptations of Falstaff
Falstaff, who dominated literary criticism in the 18th and 19th centuries, has inspired many other artworks focusing on his lovable and endlessly complex character. According to a commonly held belief, Queen Elizabeth I herself commissioned Shakespeare to write The Merry Wives of Windsor, as part of a request to see “Falstaff in love.” Verdi’s Falstaff (1893) transforms Merry Wives into the stuff of commedia lirica, or comic opera. Orson Welles’ film Chimes at Midnight (1966), filmed over many years and in many countries, isolates the Falstaff scenes from all of the plays, resulting in a movie that presents him as a tragic protagonist. The film also stars John Gielgud as King Henry and STC Affiliated Artist Keith Baxter as Prince Hal.

Henry IV at STC
For the 1994-95 season, Michael Kahn adapted the two plays into a unified work, which he directed in a production that featured David Sabin as Falstaff, Derek Smith as Hal, Ted van Griethuysen as King Henry and Edward Gero as Hotspur. In 2004, STC performed the two plays in repertory under the direction of Bill Alexander, featuring Ted van Griethuysen as Falstaff, Keith Baxter as King Henry and Andrew Long as Hotspur.

Garrett Anderson is STC’s 2013-2014 Artistic Fellow. He has interned with Victory Gardens Theater in Chicago and Bret Adams Talent Agency in New York. Garrett holds a B.A. in Theatre Arts from The University of the Incarnate Word in San Antonio, Texas.

Kevin O’Connell is a freelance dramaturg and director currently working toward a master’s degree in dramaturgy at the Catholic University of America.