Inside first rehearsal for EVERYBODY

Everybody is not standard theatrical fare. Everyman, a medieval morality play in which actors personify abstract qualities (Love, Death, Time, etc), strives to teach the audience a moral about how to live a good life through the story of one person on a journey to death. Jacobs-Jenkins’ contemporary adaptation follows the structure and tropes of the original, while at the same time shattering that mold to create a dynamic theatrical structure unlike anything that’s been on the STC stage before. 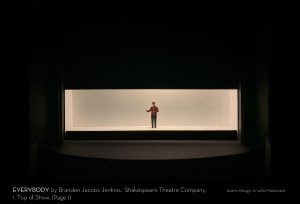 Helmed by Director Will Davis, the design team for Everybody follows suit, creating a world on the Lansburgh stage that at times stays grounded in reality and at others tiptoes into the fantastical. And don’t expect it to stay static—this is not your typical living room drama. “This set, the design itself is another character in this play,” says Scenic Designer Arnulfo Maldonado. 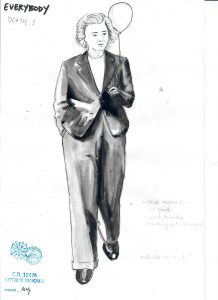 Both the balloon motif and the interplay of breath and air weave throughout all the design elements in the show. Maldonado explains, “We start with a very compressed space, and as the space fills with people and air and breath, the space starts to expand⁠—literally and figuratively.”

And though there are several elements to the scenic design, the palette is purposefully kept simple and neutral to allow the other designers to shape and fill the space with form and color. Will Davis plans to encourage Lighting Designer Barbara Samuels to “go bananas” and use color and shadow to mirror the emotional journey of Everybody through the first half of the play. She and Maldonado are even collaborating to use the lighting instruments themselves as scenic elements to help build the architecture of the space for certain scenes.

The costumes from designer Melissa Ng are contemporary yet permeated with medieval influences. Since five of the actors’ roles are determined by an onstage lottery during each performance, their costumes need to be simple and flexible. In looking at paintings from the period in which Everyman was written, Ng has drawn out certain colors and silhouettes that nod to the original period as well as fit within our modern morality tale.

The biggest medieval influence is in the costumes for the characters of Strength, Beauty, Mind, and Senses. Drawing from medieval and Baroque vestments and ceremonial robes, Davis hopes that the audience feels the sudden shift to a more medieval, religious world when these characters appear. By designing hats and headpieces that clearly name each character, Ng leans into the trope of personifying inanimate qualities, which may be a strange dramatic experience for modern playgoers. Their arrival signals to Everybody that the journey to the grave is nearing its end and intensifies the gravity and mythicism of the moment. 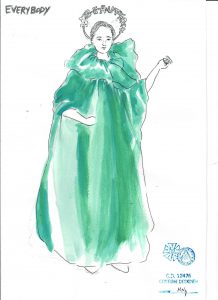 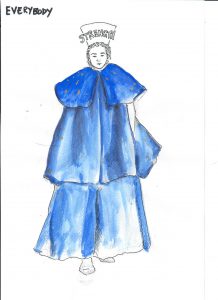 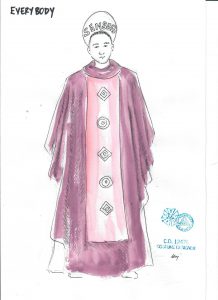 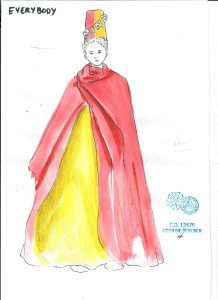 Davis sums things up succinctly, paying reverence to the script and stating everything “is influenced by the way Branden wrote the play, where it’s crashing this ancient morality play with his current moment.” You can expect your journey to be equally transformative as Everybody’s.

Everybody begins performances on October 15. Subscriptions and single tickets are now available at ShakespeareTheatre.org or by calling 202.547.1122.