What Are We Laughing at When We Laugh at Gogol?

Gogol is perhaps the weirdest of Russian writers, and The Government Inspector is certainly among the funniest of Russian plays. It’s possible that no other work has so thoroughly infiltrated the lexicon of educated Russians: without The Government Inspector, no one would “take bribes in borzoi puppies” or be “sort of married,” and no one would talk about hospitals where the patients are “getting better like flies.” As these lines suggest, Gogol’s imaginary world is both hilarious and very, very dark. 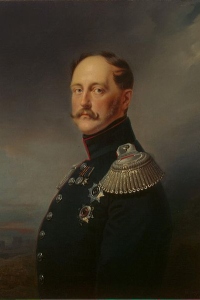 Portrait of Emperor Nicholas I of Russia by Franz Krüger, 1852.

It’s been said that Gogol hardly has a biography: no marriage, no lovers, no children, few close friends, an unremarkable education, few institutional affiliations that might help us locate the source of his gift. His background was fairly typical of the minor Ukrainian gentry, including in its cultural hybridity. The family’s official name was Gogol-Janowski, with Janowski signaling their partly Polish heritage (which Gogol later denied). They generally spoke Russian at home but Ukrainian at times; they corresponded in Russian and read in Russian, Ukrainian and Polish. They were undoubtedly loyal subjects of the Russian empire, despite what Ukrainian nationalists have occasionally claimed. In fact it was only after Gogol arrived in the imperial capital of St. Petersburg that he began to perceive any potential for tension between his Ukrainian and Russian identities. His approach to this duality was generally pragmatic, even opportunistic: noting the capital’s craze for all things “Little Russian” (“Little Russia” being a slightly patronizing “Great Russian” name for Ukraine), Gogol initiated his career by successfully exploiting this fad, setting his early stories in a folksy Ukrainian village that invited urbanized “great Russians” to enjoy what they saw as their Ukrainian little brothers’ gratifyingly pre-modern ur-Slavicness.

Gogol’s origins made him a genuine anomaly among the Russian writers of his day. In the late 1820s when Gogol (then barely 20 years old) began his career, literary life was dominated by a tiny minority of cultured readers and writers, often referred to simply as “society.” These men (and a very few women: hence my use of masculine pronouns) were almost all aristocrats, born to high culture and perfectly at home in the salons that served as the main locus of literary activity. Gogol, by contrast, was not only deeply eccentric by nature but also a provincial outsider, alien to this worldly milieu where a very specific set of manners was deemed indispensable. While writers like Alexander Pushkin (Gogol’s contemporary and his unlikely champion) took seriously the salons’ imperative never to appear serious—the goal was to be cool, to make everything look easy, right down to improvising complex poetry on the spot—Gogol was liable to sit silently in a corner with his head ostentatiously bowed, perhaps responding to attempts at polite chitchat with information about the state of his bowels or his eternal soul. But thanks to his immense and strange talent, he was nonetheless welcomed into the highest circles of Russian cultural life.

Furthermore, despite his willingness to capitalize on his Ukrainian ethnicity, Gogol identified fully with the Russian imperial project: he wanted to be a great Russian writer. And despite his participation in the salons—where “literature” was largely an oral affair, and the lines dividing readers from writers were by no means clear, and professionalization was frowned upon—Gogol cast his lot with printed texts. His career spanned a period of important reorganization in Russian literary life, a period when the salons’ influence was declining and books were being ever more widely distributed to an ever more sizable and diverse readership. This was the audience that Gogol chose, even as the literary establishment wrung its hands over the commercialization of literature and new readers’ abysmal taste. He was keenly aware that in the brave new world of printed books, the Russian author who published his works sent them out into a world of largely incompetent readers, whose responses he could neither predict nor guide. But he also knew that an author, by renouncing control over the book he sends out into the world, confers upon it a new power, simply by allowing it to circulate widely.

These new conditions help explain the pedagogical impulse that motivates much of Gogol’s work, including his funniest work. The Government Inspector is a very funny play, but it’s meant to be an edifying one as well: as the Mayor says to us, the audience, at the end, “What are you laughing at? You’re laughing at yourselves!” While Gogol’s didacticism took different forms over the course of his career, from the straightforward to the mystical, virtually all of his writings work hard to teach us something. Yet given how elusive his art tends to be—permeated by complex irony, minimally concerned with psychology or plotting—the nature of this “something” is always difficult to pin down.

Like virtually everything Gogol wrote, The Government Inspector is built around the slimmest of plots: corrupt officials in an unnamed Russian town mistake a dimwitted young visitor from St. Petersburg for a government inspector. The provincial malefactors, having realized that the capital has turned its eyes upon them, are both anxious and deeply gratified. In their far-off, anonymous city, they fear the accusatory and unmasking gaze of St. Petersburg—but they long for it as well, because, it seems, their manifestly insignificant lives promise to take on meaning when subjected to the capital’s discipline. They dream of the capital not only because of its associations with power and money, but also because of the capital’s ability to confer significance. One character sums up the provincial view of the capital’s signifying power when he begs the visitor Hlestakov to inform St. Petersburg that he exists: “in Petersburg tell all the various bigwigs … that in such-and-such a town there lives Pyotr Ivanovich Bobchinksy.” In The Government Inspector the capital looks (occasionally, and unpredictably) at the provinces in order to inspect, indict and control; the provinces look back in order to imitate, to see themselves reflected in the eyes of the powers-that-be (thereby confirming that they actually exist), and to formulate alibis as needed.

Gogol’s play—again, like a number of his other works—imagines a world of plot-mongerers and conspiracy theorists, the fundamentally unstable kind of world he feared was being shaped by the promiscuous circulation of printed “information.” The result is interpretive anarchy. In The Government Inspector the townspeople’s energetic lying, fawning and bribing inspire Hlestakov to improvise his own fantastically comic lies about himself and about life in the capital. In St. Petersburg, Hlestakov crows, a watermelon weighs 700 pounds, he’s on intimate terms with Pushkin and 35,000 government messengers once came running through the streets to find him. But Hlestakov is by no means tricking the locals: he’s simply telling them what they already believe. He’s responding to their image of St. Petersburg, an image that’s quite capable of accommodating the idea of, say, a 700-pound melon. Hlestakov tells stories of being “taken for” an important official in St. Petersburg, and the provincial mayor’s wife is duly impressed: in a world where being “taken for” a V.I.P. is just as good as being one, a belief in the capital’s essential superiority is merely what we might call these characters’ foundational mirage, the delusion that generates all their other delusions. There’s nothing to suggest that this conviction has any more basis in reality than does Hlestakov’s fantastic melon. In fact, until perhaps the very last lines of The Government Inspector, when the arrival of the real government inspector is announced, it’s virtually impossible to locate any standard against which we might judge what we are seeing.

Gogol’s play debuted in 1836 to great success (the tsar sat front and center, applauding enthusiastically at what he assumed was an indictment of those who failed to uphold his autocracy’s high standards). Gogol, however, felt that the play was not fully appreciated—though what might have constituted adequate appreciation to him at this point in his life is unclear, since his goal seems to have been nothing less than the instantaneous moral and spiritual regeneration of all Russia. In fact, his dissatisfaction with the public’s response to The Government Inspector convinced him to decamp to Rome, where he was to spend much of the rest of his life writing his masterpiece Dead Souls while giving himself over to increasingly grandiose ideas about the message he was destined to convey to his countrymen. The Government Inspector’s success derives in part from its ability to imply (without stating outright) the presence of this message, and to suggest that it somehow concerns Russia and Russianness. Here as in Dead Souls, we’re persuaded to experience our own confusion as a testimony to some fundamental mystery; as Gogol’s admirer Ivan Aksakov said upon his death, we “cannot yet” assess “the whole vast sense of the life, suffering, and death of our great author,” nor his “deep and severe meaning.”

“Interpreting” Gogol presents much the same problem today as it did 150 years ago. We can side with the 19th-century critics who saw him as a realist devoted to exposing social injustice, or we can side with the modernists who emphasized all that’s surreal and grotesque in his work. Much of his enduring fascination derives precisely from this ambiguity, which in turn relates to one of the fundamental problems (and joys) of classic Russian literature. Russian writers are famously willing to ask big questions—leaving it up to us to decide to what degree we want to connect their “eternal” questions to the particular historical circumstances that led Russians to pose them with such urgency.

All Russian translations are the author’s own.