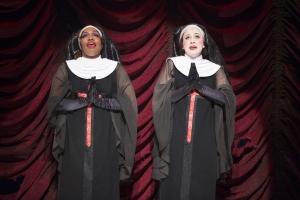 “I had to figure out what made a striptease,” Wernick says,before hastening to add, “musically speaking, of course. It typically consists of a  particular kind of rhythmic and harmonic language, that boom-cha-cha feel. There’s a lot of drums, a lot of accents, horns wailing. Melodically, it couldn’t have the jauntiness of Schoolgirls or the soaring, aching quality of Immer Wieder.”

The cabaret’s most outré number, in which two actresses dressed as nuns perform a taboo-busting strip, turned out to have, Wernick says, “a bluesy, sinuous, chromatic quality, with a melody one could imagine being played on a saxophone. Harmonically, these songs tend to use a lot of the same conventions as you would find in Dixieland music. They rarely go to minor chords. Instead, there’s a constant lift, a constant  build of energy.

“I had to figure out a showbizzy way of building the song to a climax,” Wernick says, again adding “musically speaking. I did it partly by using the age-old trick of modulating up into a new key.” The number ends in a flurry of bodies and dancing. He smiles devilishly, “It’s fun.”

Learn about the other songs in the cabaret: