An Interview with Lee Liebeskind 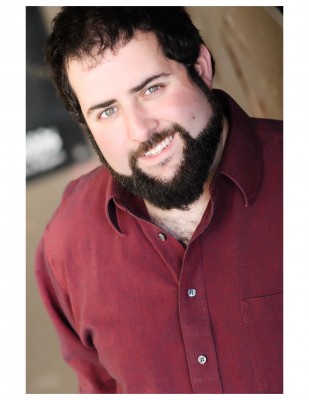 Describe your artistic vision/goals:
As a director, or perhaps as a theatre artist in general, my vision and goal is to tell a really simple story in a very magical way.  I like to think of what we do as a gift we give to someone.  So the gift I like to give is something small, precious, and meaningful, although it is wrapped in a very elaborate package made with magic and wonder. I tend to lean towards one of the three archetypal stories (boy gets girl, a man learns a lesson, and ‘the brave little tailor’), and then I try to present that story using all the tools of theatricality we have (song, dance, puppets, etc).  The goal is to touch the audiences’ hearts with the simplicity of story, but move the audiences’ minds/souls/bodies with the way it is told.

What do you hope to learn from the Directors’ Studio?
My hope from the Directors’ Studio is to continue to learn.  There is a point in every artist’s career that they get to where the ability to learn without having access becomes very difficult. Your options are to hope for an assistant director position with a director that you want to learn from (you and many other people), go to grad school (very expensive and again could be luck to land the right grad school), or you have to learn by producing and directing work on your own and examine afterwards what worked and didn’t (also very expensive).  There are still a couple other options, but the point is that there aren’t many adult-in-process learning opportunities for up and coming directors.  So, for me, the opportunity to learn from leaders in my field, ask questions that aren’t usually talked about, and gather knowledge on how things are done on a level I don’t often get to work at, yet.  That is invaluable.

What was the most challenging show you ever directed?
I always feel like the last show I directed is always the most challenging show I ever directed.  There is always something new.  So for me the last show I directed, Drunkle Vanya, was a beast.  It was performed in a literal bar, in a space usually reserved for punk rock shows.  The cast was immersed with the audience and interacted with them.  They played games, drank with the crowd, and sang songs, all while telling the story of Uncle Vanya.  The difficulty level of taking a classic story that is a challenge in it’s own right, add in immersive theatre, and drinking games was a delicate balance.  I know it wasn’t perfect, and there would be things I would change, but I was proud of how that show turned out and how challenging it was.

What got you started in the arts?
I was in high school and in drama class as an elective.  They were doing auditions for the fall show, A Few Good Men, and I had told the teacher that I wanted to audition.  The teacher took me aside and told me, “You are really great, but I wouldn’t cast you in this show.” I was so angry that a buddy and me went home that night, read the script, watched the movie, and worked on our audition material for a few hours.  A few days later we auditioned, and while she said she couldn’t cast me as a soldier, that she was impressed with how hard I worked and gave me the role of the Judge.  I fell in love with the challenge, the difficulty, and the ability to keep pushing myself both on stage and off stage.

What’s your dream show to direct?
Rosencrantz and Guildenstern are Dead by Stoppard.  I love that show.  I love any show that combines that simple story with high metaphysics and science.  That show is also really challenging in that it is really three different shows combined into one, and the level to balance the storytelling, comedy, and high level of thought, while keeping things moving forward, is something that just draws me to it.

The other show I have been thinking about for a while now is a new play called, A Bid to Save the World by Erin Bregman.  It was produced last year at Source Festival, and I worked on a reading of it for The Inkwell the year before that.  Very similar to R & G, the play takes place in three different worlds and explores how we handle grief and death.  For me, it also tackles what are perspectives on who someone is at any given moment and how we define ourselves after a tragedy.  Dying to get a shot at that one as well.

Who’s your favorite director? What do you admire about their work?
Wow, that is kind of a hard one.  I have a lot of favorite directors from Anne Bogart to Peter Brook, from Randy Baker to Natsu Onoda Powers, and everyone I have ever worked with.  The newest member of my growing list of directors I admire is Will Davis.  I saw his production of Colossal at Olney last year, and it blew my mind.  The balance between combat and dance, the interweaving of stories and motion, and the world that was created in that space blew my mind.  That show was not easy, and his production was really wonderful.  He is someone I would love to assist under.

Does the idea of directing classical theatre scare you, excite you, or both?
A little of both. I didn’t study much classical theatre in college.  We did our requisite time with classics in Theatre History and Voice and Movement Class, but not much in depth work.  Other than my two years touring with The National Players (America’s longest running classical touring company), I hadn’t interacted with many classic works.  Most of my time has been spent on new works and new play development.  I think the thing that both excites me and scares me about classical theatre is the ability to say something new to someone with it.  Finding the right classical work to say something that both speaks to me and to an audience in words that cannot be ignored.

Which Shakespeare play would you most like to direct?
Macbeth. I have had an idea for the past two years about this play that I would love to implement.  The imagery and the language, the emotional depth and physical violence, the simple story and complex way it is told—that is exciting.  I love the question: What makes a man/monster choose the path he chooses or is the path already chosen for him?  It is something I think we still wrestle with today in not explaining why people do what they do, but the actions that lead them to get to the place they are now.  I also feel like in a time of constant crisis and war that this play speaks to a lot of things that hit very close to home.  Man, I want to tell you more about my concept, but I really just want to execute it and show you.

Lee Liebskind is the founder and producing director of The Inkwell—a local organization dedicated to the development of new plays—A company member of Rorschach Theatre and an artistic advisor of Flying V Theatre.  He is also a two-tour veteran of the National Players and a film producer and editor for WILL Interactive. Liebskind received his BA in general theatre from Towson University.