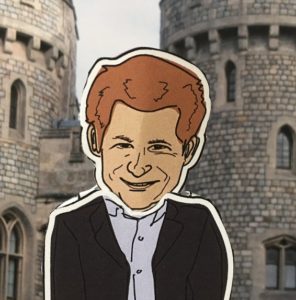 Prince Henry of Wales, or Prince Harry as he’s familiarly called, is the younger son of Prince Charles and Princess Diana. Born in 1984, the prince is now fifth in line to the British crown after his father Charles, brother William, nephew George and niece Charlotte. Harry was 12 at the time of his parents’ divorce and his mother’s death. Like his father and brother before him, Harry was educated at independent schools rather than privately tutored. He finished his education at Eton college, where he excelled in sports like polo and rugby. After Eton Harry took a gap year, during which he worked at an Australian cattle station and filmed a documentary film on orphaned children in Africa.

In his youth Harry gained a reputation for rebellion, often getting confrontational with press agents. He was often pictured outside of nightclubs and partaking in underage drinking. He was infamously photographed sporting a Nazi German uniform with a swastika armband at a costume party event. After each of Prince Harry’s scandalous moments, the prince and the royal household swiftly apologized. Many of Harry’s public appearances since this period have served to rehabilitate his public image.

In 2005, Harry entered the Royal Military Academy in Sandhurst. Like his brother William, Harry wanted to see active deployment and all the necessary arrangements were made to permit this. However, in 2007 the head of the British army announced that Harry could not serve in Iraq as planned due to threats made against the prince. In 2008 it was revealed that Harry served secretly in Afghanistan as a Forward Air Controller. Later that year Harry trained to fly military helicopters with the Royal Air Force and his brother Prince William. In 2012 Harry embarked on his second deployment to Afghanistan as an Apache helicopter pilot, returning to the UK in early 2013. Shortly thereafter Harry became a staff officer in the Ministry of Defense in London, helping coordinate events in London where the army would be present. In 2015 Harry undertook further military training in a secondment in Australia, eventually ending his career with the Army in the summer of that year.

In 2014, Harry launched the Invictus Games, a Paralympic sporting event for injured servicemen and women, which he served as President. He continues to work with organizations serving veterans and servicemen and women to this day. Other philanthropic interests include continuing the work his mother began, working with HIV/AIDS organizations and children’s medical funds. Many of his charitable efforts come in the form of sports events organized by the Prince, in which he often participates. He too makes international diplomatic visits on behalf of the crown.

Get your own printable Prince Harry paper doll here.

Playwright Mike Bartlett fictionalized the royal family for his “future history play” King Charles III. Played by Harry Smith, Bartlett’s Harry is perpetually caught between his family and the press. Bartlett crafts a version of Harry that uses his escapades as escapism from the pressures of his princely duties.
Read more on Bartlett’s treatment of Harry here.