Bob Blair is a former English Lit major who, after five years 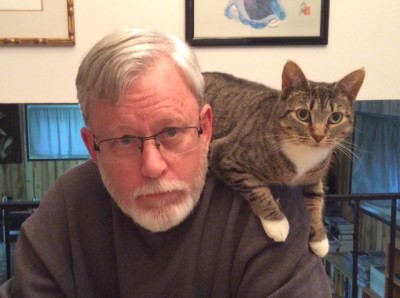 with the Peace Corps in Thailand, transformed himself via academic chrysalis into an economist. Since 2008, however, he has returned to his caterpillar heritage by facilitating weekly poetry workshops at Miriam’s Kitchen. His work has appeared in Sojourners, Poet Lore and Split This Blog.

Place-bound and time-bound, the play begins
its cycle of glittering transformations.
Scene repeats script, and the theater changes.
The actors, alchemists of the dark,
speak words at the sound of which
invisible accomplices
in the seats out front enter the play
themselves – finding a sudden rightness,
a satisfaction that suffices.

Mon Dieu, the pace is blistering,
At every turn a twistering,
Mademoiselle needs mistering —
A Po-Mo comedy!

Part Cyrano meets Juliet
Part Groucho Marx, and so we get
A literary mash-up set
In upper-crust Pah-ree.

Poetic pere prepares a play
To speed his daughter’s wedding day,
Hoping the bookish babe will say:
This beau’s the man for me.