Katherine E. Young is the author of Day of the Border Guards (U of Arkansas 2014 Miller Williams Arkansas Poe 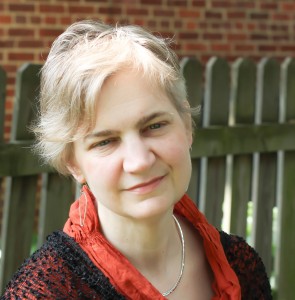 try Prize finalist), named one of Beltway Poetry’s “Top Ten New Books of 2014,” and translator of Two Poems by Inna Kabysh (Artist’s Proof Editions).  Her poems appear in Prairie Schooner, The Iowa Review, Shenandoah, and others; her translations from the Russian won third place in the 2011 Brodsky-Spender Prize competition and were long-listed for the 2014 PEN/International New Voices Award.

Bar at the Folies-Bergère

It starts with the scent of lavender as she
buttons clean pantaloons, laces up stays,
smoothes her bodice and shakes out the frills,
ties the black ribbon about her neck.
Her costume smells, as they all do: mingled
sweat and makeup, the fabric itself,
splashed, perhaps, with the licorice twist of absinthe.
Then come powder and rouge, the small earrings,
a pink and white corsage already starting
to expire. Her props are placed on view: beer bottles,
champagne, a vase containing two pale roses,
cut glass bowl of oranges that may
or may not indicate a certain kind
of availability. Leaning on
the marble bar, she doesn’t look at you
(Why should she look at you? Can you give her
what she needs, or even cab fare home?):
acting, maybe, or maybe beyond acting,
her face bleak, artificially rosy amid
the moon-pale globes and crystals shimmering
in the ersatz heaven of the cabaret.
Perhaps a man inspects her in the glass,
perhaps he’s looking past; neither of them
seems to see the woman on the trapeze,
feet squeezed into ankle boots of lizard green.
Later, she observes his red-gold lashes,
watches his still-young face slacken in sleep,
breathes in his scent of cigars, cheap brandy,
scent that clings to her fingers like orange
oil as she works her nails beneath the skin,
methodically stripping the pith to find
whatever’s left of life’s sweet flesh.

Author’s note: this poem began with the concession stand at the Lansburgh Theatre, which reminded me of the concession stand in one of my favorite paintings, Manet’s “A Bar at the Folies-Bergère” (as close a link to French farce as I could forge in a hurry).  It has been suggested that Manet associated oranges with prostitution in his paintings; it is known that Manet asked the real-life woman in the bar to pose in his studio for the painting