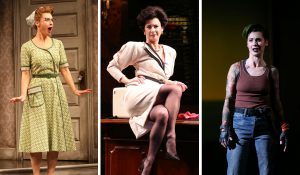 STC Affiliated Artist Julia Coffey is familiar to STC audiences from her appearances in classics like The Merchant of Venice, The Beaux’ Stratagem and Pericles. But the Washington D.C. native is “marvelous” (DC Metro Theatre Arts) as three very different roles in David Ives’s world-premiere comedy The Panties, The Partner and The Profit. With only a week left to see her hilarious antics – including her Act II exist that critics call “my favorite stage moment in months” (Two Hours’ Traffic) – she told us about being back at STC in this quirky new work.

Shakespeare Theatre Company: What’s it like returning to STC after almost seven years?

Julia Coffey: Wow, has it really been seven years? That’s too long! It’s simply marvelous to be back of course! And to be in a small cast, in a new play, a comedy thank goodness, and at the more intimate Lansburgh, well, it’s all just icing for a fantastic experience. The rehearsal process felt like family gatherings, all of us just playing with new bits, making each other laugh, figuring things out together – it was a very relaxed, happy rehearsal room. And the performances at the Lansburgh have been a kind of extension of that feeling – intimate, personal – the audiences have been so generous and willing to go along on this crazy ride! For me it’s always a kind of homecoming playing in DC, but this show in particular has been a very warm and joyous return.

STC: What’s it like to play three very different characters in one play?

JC: It’s a bit of a whirlwind! It took some practice to work out the mechanics of it all – there are a lot of wig, costume and make up changes – but it’s a well oiled machine now, and those external changes help to define the characters a LOT! As for the actual performing, in a strange way, they kind of lead to each other – Trudy’s awakening leads to Sybil’s confidence which turns into Omega’s fight for justice. But overall, yes, they are very different people and that’s super fun. I get to explore the little streets and avenues of their personalities, and I like that all together they make up a crazy map of humanity.

STC: What do you want audiences to get out of seeing The Panties, The Partner and The Profit?

JC: I think in the rehearsal room, our collective hope was that we were building something that got people to recognize their capacity for courage  – there’s no act of bravery too small – those little leaps we take in our lives are necessary practice for when external forces – like maybe even the end of the world – demand real acts of courage for the greater good.

STC: You’ve worked with Michael Kahn before at STC. What’s it like to work with him again during his final season as Artistic Director of STC?

JC: Oh, it’s a dream come true for me to be a part of this final season. I grew up watching this company and the experience shaped me as a person and as a performer. This show has been no different in it’s impact, but in a different way. Maybe because our show deals with the end of the world, or because we were a small cast, or we were in uncharted territory with a new play, but I felt this time working with Michael that we were a real team working and connecting as people. I feel so grateful that I got this chance to get to know Michael a little better as a human being, his warmth, his wry humor and just his overall passion for creating something out of the energy between us all.

JC: Well of course they’re smart and savvy, that goes without saying, but what I love most is that they’re also GAME! Our play takes a lot of twists and turns and the audiences have been right there with us, totally willing to go to these new strange places we take them to. That’s an amazing act of generosity and makes for a really fun night of theatre together!

The Panties, The Partner and The Profit must end January 6.