A Note from Director John Collins 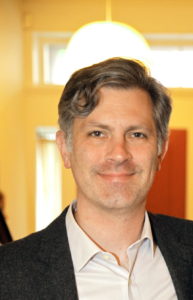 In 2006 we premiered Gatz, a verbatim staging of every word of F. Scott Fitzgerald’s The Great Gatsby. It was a radical experiment for us, not least because language had always taken a backseat to our movement work and experiments with form. Yet the problem of presenting an entire novel on stage, unabridged, appealed to our desire to test the limits of live performance.

With Gatz we found a new kind of theatrical challenge for ourselves: the translation of literature to the stage. Feeling this challenge warranted a deeper dive than just one novel (notwithstanding the thoroughness of the approach to Gatsby), we looked further into early 20th-century modern­ism. In 2008 we staged Faulkner’s The Sound and the Fury. In early 2009 we decided to complete a trilogy of adaptations.

Having selected Hemingway as our next author but not a specific novel, we gathered as an ensemble to read his work aloud. We first read A Farewell to Arms and The Sun Also Rises. We would go around the table, trading paragraphs and assigning roles, trying to get a feel for how one of these might come to some new life on stage. When we read The Sun Also Rises, something immediately clicked.

For Gatz we staged every word of a fairly short novel. For The Sound and the Fury we had staged almost every word of a long chapter from a novel. The Sun Also Rises, much longer than Gatsby and more straight­forward than Sound and Fury, called for a different approach. Though Hemingway is known for his luxurious descriptions of passing landscapes and encounters with nature, we were instantly attracted to his dialogue. Crisp, witty and almost contemporary, the banter among the characters seemed to have been written for our actors. After all, with the extensive international touring we had been doing, we could easily relate to a band of ex-pats drunkenly making their way through Europe.

With a focus on this dialogue, we set about the painstaking task of editing this 260-page book into a two-and-a-half hour play using only Hemingway’s words. This turned out to be a much more daunting task than we had faced in either of the other two projects. Many, many scenes were staged and left on the cutting room floor as we slowly worked our way toward what would become, after about three years of work, our final edit.

An initial version premiered at The Edinburgh International Festival in 2010, following a residency at ArtsEmerson in Boston. The Select then had its U.S. premiere in Philadelphia, where we continued to tweak and shape it. Touring followed in Antwerp, Hannover, Vienna, Amsterdam, Zurich, Princeton and Boston before we opened in New York at New York Theatre Workshop, our longtime co-producer. Throughout, we wres­tled with how to create an engaging live performance while navigating the tension between the communal experience of theater and the solitary intensity of reading great literature.

In 2012 and 2013 for performances in Lisbon, Dublin and Princeton, we gave the show a final edit, losing almost 30 minutes yet still managing to encompass the narrative span of The Sun Also Rises.

The Select was created by the Elevator Repair Service ensemble, which this year celebrates 25 years of making original work. Though the cast numbers just 10, our entire ensemble consists of upwards of 25 actors. There have been times in the past seven years of rehearsing, performing and touring The Select when an actor or two, sometimes more, has had to take a break to do other work. In these cases, we are fortunate to be able to draw upon that extended group. And if we don’t find a suitable replacement already in our ranks, we take the opportunity to grow our ensemble by recruiting a new performer. This run at Shakespeare Theatre Company is one of those times when we are casting veteran ensemble members in new roles and also welcoming a couple of new actors.

Performing The Select at the Lansburgh is something of a mile­stone—this is our longest ever sit-down run outside of our home base of New York—and it seems appropriate that it should happen in D.C. Ever since our performances of Arguendo three years ago at Woolly Mammoth, we have had a genuine affection for Washington and its theatre-going audience. We thank Michael Kahn and everyone at Shakespeare Theatre Company for hosting us. We’re very happy to be here.