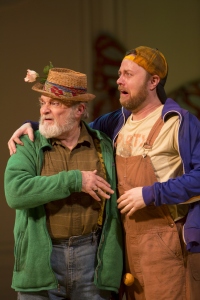 A Shakespeare play can demand an enormous cast: Henry IV, Part 2 has 67 parts. But, in staging a play, there are many reasons to use fewer actors. In high school, the drama club could be too small for a large production, or there may not be enough boys for all the male roles. Maybe an upstart theatre company doesn’t have the funds to costume 67 actors; maybe they don’t have the funds to pay 67 actors. Perhaps the miniscule black box performance space can’t physically hold more than 67, including audience. But why might a big company choose to limit the size of their cast?

The struggle between art and logistics has been managed by theatre artists since Shakespeare was writing. Academics still wonder: were some of Shakespeare’s dramaturgical choices dictated by his (most likely) thirteen-actor company? Were roles doubled for practicality, or was Shakespeare exploiting the convention for dramatic effect? Modern directors often choose to double- or even triple-cast their actors in multiple roles, sometimes for efficiency but also for specific artistic goals. Forced to be creative with staging, rhythm and narrative, a small group of actors tells a more dynamic story with less. Small casts are a potent artistic tool, an interpretive instrument to tease out new ideas in well-worn plays.

One of the most prominent recent examples of a “small-cast Shakespeare” performed was Fiasco Theater’s 2011 Cymbeline, another of Shakespeare’s late plays. With six actors and a minimalist set, Cymbeline was an ironic success, playing next door to the infamous Broadway behemoth Spider-Man: Turn Off the Dark. Surprisingly, the most common accolade bestowed in reviews was the production’s clarity. With a small cast playing two, three or four parts each, Fiasco managed to make a fantastically complicated fairy tale into a coherent narrative, sorting out the tricky spots of the play with ingenuity. Performers hopped from character to character; crates and a white sheet fashioned the disparate landscapes of the play; an actor clicked billiard balls to provide sound for a game of pool. This was not realism. Instead, the audience was asked to activate their own mental agility. As the New York Times marveled, the sheet alone became “a billowing sea, a virginal bedspread, a mournful shroud and a Roman toga, among other things.” Fiasco’s inspired resourcefulness, in the end, told a more convincing story. A fully-formed production emerged through collective imagination, a creative exercise that can only exist when freed of the clutter of hyper-produced, over-conceptualized Shakespeare.

In addition to demanding ingenuity in staging and story, a small cast can highlight an important theme or element. Shakespeare’s R+J, seen recently at Signature Theatre, told the story of Romeo and Juliet with just four young men. In this rendition, the Shakespeare tale was a play-within-a-play, acted out in secret by four students at a repressive private school. Performing alone in their dorm, the four played all of Shakespeare’s characters—and in the process told their own forbidden love story. This structure highlighted the penetrating, cathartic power of Shakespeare’s play. Conversely, in the New York production of Macbeth directed by John Tiffany (Black Watch, Once), the small cast underlined artistic virtuosity. Playing as many as eight different roles, Alan Cumming delivered a tour-de-force performance as a patient bouncing through multiple personalities in an insane asylum. The premise highlighted Cumming’s arresting physicality and gender-bending, and added a new note of tortured vulnerability to Macbeth’s madness.

The strengths of the small cast aesthetic have also been transferred to contemporary non-Shakespeare—even with productions on a larger scale. Think of Mary Zimmerman’s Metamorphoses, most recently produced at Arena Stage. Though the Metamorphoses cast was slightly larger at ten actors, each performer played four or five different roles in various stories, creating the impression of a single-minded ensemble conjuring myths from thin air. Similarly, in Gatz, the 13-person ensemble of Elevator Repair Service summoned the world of The Great Gatsby from a shabby office. The New York Times described the birth of Nick Carraway’s world onstage: “This metamorphosis, though, occurs by ingeniously sly degrees, and it seems to be taking place entirely in the reader’s mind… It’s unlikely that these actors… would be cast in these parts in a full-dress, conventional Gatsby. But Nick’s vision magically bestows upon them all the traits they require.” Nick’s vision—and the audience’s vision—transports the actors to the many characters and moods of Fitzgerald’s novel. And again, last fall in The Strange Undoing of Prudencia Hart: five ensemble members played academics and ghosts, demons and debauchers, bringing the ballad from Scotland, to hell and back to the Bier Baron.

A small cast can be a brilliant tool for storytelling, allowing us to focus on the elements of a production that are most essential. But at its core, the potency fomented by a small cast lies in the effect of actors transforming before our eyes. As performers slide in and out of roles, they implicitly highlight the intense magic of theatricality. And in stories like The Winter’s Tale, where rebirth and renewal are primary, these transformations are a source of immense power.

Laura Henry Buda is STC’s Education Coordinator and served as Artistic Fellow in the 2011-
2012 Season. She holds an MFA in Dramaturgy from the A.R.T./M.X.A.T. Institute at Harvard
University.