The importance of eating in Earnest.

The following article was published in The Washington Post, January 23, 2014.

Backstage: In ‘Earnest,’ it’s important to come to work hungry

Let’s talk, for a moment, about the importance of eating in “The Importance of Being Earnest.”

Oscar Wilde’s tea-parlor comedy is onstage at the Shakespeare Theatre, and by the time its extended run is over on March 9, actor Anthony Roach will have been eating five blueberry muffin halves a day — or 10 on days with matinees — for eight weeks.

“I don’t know if I’ll ever be able to eat a blueberry muffin again after I’m done with this,” he said. 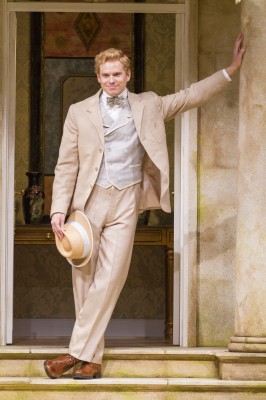 Anthony Roach as Algernon in "The Importance of Being Earnest."

Before being cast in “Earnest,” Roach’s tea-drinking consisted of herbal remedies to sooth an occasional sore throat. Now, he knows how to delicately drop in a cube and to always rinse his cup before getting a refill. But even as Roach and his co-star Gregory Wooddell go through the motions of pouring a proper cup, they are stuffing their faces, and that’s a paradox that the actors are playing up in this production.

Act I is set in the posh London flat owned by Roach’s well-to-do character Algernon Moncreiff. He’s preparing to host his aunt for tea and orders a tray of cucumber sandwiches especially for her. Then his pal Earnest stops by, and the two men proceed to devour all the finger food before she arrives.

“They are actual cucumber sandwiches, made of Wonder bread and very thin cucumber slices, and rolled out very flat,” said Roach, who is normally partial to whole grains. “I cannot tell you when the last time was that I ate white bread before this.”

He asked the stage crew to add “a bit of lubrication” to the sandwiches, and they did, although he doesn’t know exactly what. One night last week, for some reason, the sandwiches were more brittle than usual. One broke in half and fell to the stage.

“I wasn’t sure what to do,” Roach recalled. “I couldn’t put it back on the tray, because the sandwiches have to all be gone by the time Lady Bracknell arrives. There wasn’t a trash can, so I made the split-second decision to pick it up and put it my mouth. That night, the audience got a little extra subtext.”

Like, Algernon believes in the five-second rule. And he really, really likes those cucumber sandwiches.

In Act II, it’s blueberry muffins that Roach and Wooddell are gorging themselves on. Or appear to be. The goal, in rehearsal, was figuring out how few muffins they could eat while still appearing to have no self control. “My script has all these places where I’ve written, ‘Muffin?,’?” Roach said. Director Keith Baxter settled on Roach eating five, and Wooddell two, for a total of seven. But again, there have been mishaps. At one preview performance, Roach put his first muffin in his mouth and instead of the normal, crumbly goodness, “The muffin had the texture of fast-mix concrete. I knew I had to eat five of them, and I didn’t know how I was going to get through my lines.”

Turns out, the stage crew had tried substituting sugar-free muffins, but the lower-calorie option was much harder to chew. “I’ve gotten very accustomed to the squirrel technique — of stuffing the muffins in my cheeks — but these just didn’t work.”

As in Act I, there’s an actual plot point forwarded by the characters’ overindulgence: The two men are fighting over whether Algernon can marry Earnest’s ward, Cecily, but the debate dissolves into a spat over who ate all the muffins, wherein the men holler at each other with their mouths full.

“It’s such a childish argument that they are having,” Roach said. “When [Wooddell] yells at me for eating the muffins, I wish I could retort, ‘But you had two!’ Unfortunately, Mr. Wilde did not write that line for me.”