Pinter explored sex, marriage and the social tensions lurking behind closed doors of “buttoned-up” British society. By 1962, however, Queen Elizabeth II had led the country for a decade. As she reigned, society started to shift—particularly in ways that would affect women and their relationships. 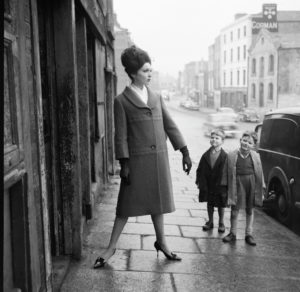 American model Linda Ward in Dublin, c. 1960. Courtesy of the National Library of Ireland on the Commons.

Fashion transformed in the late 1950s, shifting focus from international to home-grown designers with the British Boutique Movement. Best known for mod designers like Mary Quant (who opened her store in 1955), small boutiques were able to directly provide their clientele with garments that suited their lifestyles and desires. 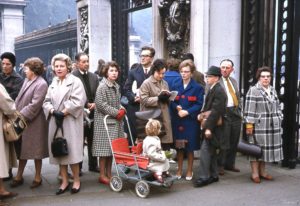 Visitors to London await the changing of the guard at Buckingham Palace, 1962. Photographed by Don O’Brien, Wikimedia Commons.

According to government data, in the early 1960s nearly 75% of women in the U.K. were married. However, unlike previous generations, wives in the Sixties were more likely to hold onto their careers. The Pill was made available to married women starting in 1961, allowing women to lengthen  the time before having kids and stay in the workforce longer. By the early 1960s, 35% of married women were working—a number that continued to grow as the decade went on.

A House in Belgravia, a Flat in Chelsea

Belgravia and Chelsea are adjacent neighborhoods in West London. Chelsea is a large neighborhood abutting the Thames. Known as a bohemian area, it became the heart of the Swinging Sixties. King’s Road was a popular place for youth culture, mod music and the growing boutique movement. Its red brick buildings became the stylish center of Sixties London. Belgravia, to the north of Chelsea, known for its distinctive white townhouses, has long been coveted real estate for the wealthy. 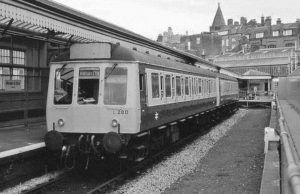 Just over 20 miles outside of London, Windsor was a great place to live while working in the big city. Men— and a handful of working women— would commute via train to London while those who stayed home enjoyed small town life in the shadow of Windsor Castle.

Sex—In and Out of Marriage

Though the bookstores and bestseller lists showed an increase in reading about sex, restrictive social norms still ruled the day. In 1960 a landmark obscenity trial was won by Penguin Books, allowing D.H. Lawrence’s 1928 novel Lady Chatterley’s Lover to finally be published uncensored. At the same time, hotel reception desks still required couples to sign in as married and, according to the BBC, frequently turned away those they considered a risk to the respectable reputation of their establishment. In 1957 a government report recommended that consensual homosexual acts should be legal. However, the government refused to take the recommendation and same-sex relationships remained illegal until 1967.