The Two Sides of Hal

I grew up feeling strangely connected to Shakespeare’s History Plays, and the seeds of that relationship were planted when I was young: I woke up one winter morning, at the age of seven, and half my face was dead. Like the classic symptoms of a stroke, one of my eyes wouldn’t close, I was numb, and my mouth wouldn’t follow instructions. It was as if some nasty little goblin had, while I was sleeping, scrawled a line of demarcation directly down the center of my head and slobbered anesthetic cream all over my left side.

Of course, my wonderful parents panicked. For several weeks, we made trips to the Children’s Hospital in Pittsburgh, where I underwent a series of tests that terrified me. I quickly came to dread removing the scotch tape keeping my left eye shut, crawling up onto the tables, and spending another few hours inside a medical torpedo tube while magnets banged around in pursuit of whatever had killed half of me.

My Mom, ever the good English teacher, in an effort to still the heart of a panicked, weepy little boy, introduced me to some plays she thought I might like. They featured a young Prince with two sides to his character, almost two faces, one could say, who struggles against all odds to live up to the expectations of the adults around him, who is simultaneously everything, and nothing, to the people he loves. The journey of Shakespeare’s Prince Hal, from reprobate drunk to leader of the “band of brothers,” held me in thrall. I have a vivid memory of lying on a butcher-papered medical table, a full class of medical students observing a painful examination as my case was so “unusual,” and reciting the St. Crispin’s Day speech in my head, over and over again, to escape.

After a few months, my symptoms slowly vanished. No cause was ever determined. Frustratingly, every other winter until I was 19, they would return. I’d wake up, and the dead face would be back. Attempting to negotiate my panic and fear, I would return to Prince Hal, always. He became a big brother to me, palpably real, and exactly what I needed. Unlike my doctors, he never pitied me, and he always believed I was capable of more. He loved the days I felt bad for myself, in fact, so that he could go off-script and berate me for not dusting myself off and getting back in the fight. “If I managed to kill Hotspur and win the battle of Agincourt, Quasimodo, you can handle a bit of a lisp and not getting a date to the dance.”

Oddly, when I began to train as an actor, my darker half never returned. And then, in 2009, my childhood fantasies came true. I was cast in the role of the grown Prince Hal in Henry V, on a national tour produced by The Acting Company and The Guthrie. For more than a hundred performances, I was given the great gift of growing up in the footsteps of a character that had shaped a great deal of my own personality. It’s hard to believe now that I’m getting a crack at his younger self. 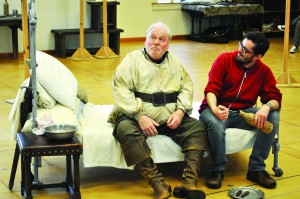 So here we are in Washington, Hal and me. What now? What have I learned? To be honest, I often feel like I know less today than I did when I was seven, sitting with the plays in my lap. I can say that my opinions of my big brother have changed. I’m less forgiving of Hal’s cruelties than I was, and now I can see his great, cracking faults, his callous and cunning ability to turn off his relationships with those closest to him. I also know how trapped he feels, how much he loathes and fears the crown that waits to devour him. At the same time, he certainly cares deeply for the people whom he is tasked to care for. He would die for them; I think perhaps he hopes to. Ultimately, I think, he feels very lost, very afraid, and certain he is going to fail, just as I did when I was young and he kept me safe.

In a sense, working on Hal here at STC, with several of my artistic idols, has mirrored the process of entering adulthood with an older sibling. He was once my hero, and now he isn’t. You can’t really love a hero, someone who learns to be perfect to the outside world. You can admire them, but you can’t ultimately get inside them. To do that, you need to start at the beginning of the journey, when they are still two-faced, imperfect and vulnerable. Now, I find myself falling in love with Hal all over again. And I might even slap him around this time.

Matthew Amendt was raised in Western Pennsylvania, trained as an actor at The Guthrie in Minneapolis, and has appeared in 13 productions there, as well as stints at theatres across the county and in New York. He now resides in Brooklyn.