…or the Feast of the Epiphany

On the twelfth night after Christmas—no later than January sixth—the great Elizabethan houses held enormous festivals of eating, drinking and revelry. It was a kind of post-Christmas binge marking the end of the Yuletide season, much as our Thanksgiving gluttony signifies the start of our own.

For just one night, servants were allowed to mix with their masters and children stayed up late and joined in the fun. One beloved tradition was the holiday masque (of which Shakespeare’s Twelfth Night itself is a sophisticated example), an immersive theatrical that anyone could perform in, so long as they donned a disguise. In another much-loved ritual, a coin was baked into a large cake. Whoever’s slice had the coin became Christmas King for a night, a Lord of Misrule presiding over the party with cakes and ale, much like Twelfth Night’s Sir Toby Belch.

On Twelfth Night, performed identities were put on and just as easily cast aside. If only for a moment, you were allowed to become anybody other than who you were in real life. The whole world turned topsy-turvy. 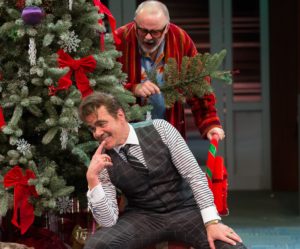 Photo of Derek Smith and Andrew Weems by Scott Suchman.

Shakespeare’s Twelfth Night is the only one of his plays to feature a title commemorating its origins as a holiday entertainment. Known in the Christian calendar as the Feast of Epiphany, Twelfth Night technically celebrated the three wise men bearing gifts to the manger. In Shakespeare’s time, however, it also provided an excuse for the cessation of natural order. As far back as Roman times, the winter solstice signified a season of carnival (the Saturnalia held on December 23) and in medieval England the Feast of Fools bears a striking resemblance to Twelfth Night topsy-turvydom. In Shakespeare’s time, the holiday seems to have fulfilled a tremendous cathartic function. As much as it was a celebration of the Epiphany, the birth of the infant Christ, it was also a primeval ritual, the last night of the revels season before the cold of winter started closing in.

Twelfth Night pays tribute to the double-sided spirit of the holiday, as well as to the “whirligig of time” that ushers out the old year and rings in the new. Like Janus, the two-faced Roman god of the threshold, this January entertainment acknowledges past regrets and new loves, death intertwined with life. Not coincidentally, it occupies a liminal space in Shakespeare’s canon: it is the last and perhaps most virtuosic of his comedies, followed immediately by the tragedies of Hamlet and Othello and the so-called “problem” comedies of Measure for Measure and All’s Well that Ends Well.

Dramaturgically, Shakespeare’s thematic preoccupation with doubleness manifests in a series of twinning. Many scenes echo or parallel each other, often revolving around the twin plots of the two twins, Viola and Sebastian, both of whom have a near brush with death at the beginning of the play and both of whom are saved at sea by nautical figures. Early in the action, both are shown in transit (in scenes of the exact same length, 36 lines) as voyagers to the seacoast of Illyria. Frequently mistaken for each other, the two twins serve as the engines of the play’s wildly farcical action and we watch twin duels, twin jailings, twin marriages.

The twinning extends to other characters. Olivia and Orsino, the play’s two aristocrats, have names that chime musically against each other, and both are first seen drowning in ostentatious melancholy, grieving the death of a brother and the pain of unrequited love. Elsewhere, Sir Andrew Aguecheek and Malvolio offer twinning perspectives on class. Sir Andrew is a knight who spends all his time slumming with Sir Toby downstairs in the world of misrule, while Malvolio is a servant who dreams of being a gentleman, lounging on couches.

Most Shakespearean comedies are set in the “green world,” the forests of As You Like It and A Midsummer Night’s Dream, which resemble an Arcadian utopia. In Twelfth Night, however, Illyria is more of a false Elysium, a fool’s paradise on the other side of the ocean that resembles our own world, but one where everyone seems strangely unhappy. From Orsino’s love pangs to Olivia’s enforced vows, to the hurtful pranks and drunken woes of Sir Toby, Sir Andrew and Malvolio, all of Shakespeare’s Illyrians begin the play in the grip of serious midlife dilemmas, badly in need of spiritual regeneration.

Two characters (another set of “twins”) prove instrumental in the eventual reintegration of this fractured, Humpty Dumpty commonwealth. The festive spirit predominating over the action is Feste the clown. Singer of the play’s unusually large number of songs—Shakespeare seems to have intended Twelfth Night as a kind of musical—Feste has freedom of movement through the various worlds of the play and a certain bemused detachment over the goings-on. Like the Caterpillar in Lewis Carroll’s Alice in Wonderland, he does not participate in the action so much as comment wryly upon it with a series of paradoxical witticisms. Among the denizens of Illyria, Feste alone can tell inner truth from outward appearance and his humor has a Chekhovian cast, a persistent undertone of sadness. The play ends, unusually for Shakespeare, not with a double wedding or a dance but with Feste singing of the wind and the rain, of the inexorable passage of time.

But the queen or king of the play is Cesario, “the little monarch.” The assumed identity of the shipwrecked Viola, Cesario is an oxymoronical character for an oxymoronical holiday and play, a lady from the sea disguised as a feminine boy, a “poor monster” whose shape makes her both master and mistress. The structure of the play is one of invasion from without, of Viola traveling through the looking-glass and healing the hurt world with her good sense and romantic passion. Like Feste, Cesario serves as a go-between, but unlike him, she finds herself profoundly invested in the action, giving voice to some of Shakespeare’s most eloquent love poetry. If Feste is the “spirit of feasting” whose return to Olivia’s court augurs the return of laughter, the ambiguity of Cesario’s disguise conveys the elusive nature of erotic fantasy that captivates the characters at the center of the drama.

Twelfth Night climaxes with a scene of the romantic imagination made concentrate. The play’s doubles become one, enclosing all within a redeemed new order. For a topsy-turvy world worthy of the Feast of Fools, Shakespeare provided the most unexpected thing: a miraculous rebirth, a theatrical epiphany.