Uneasy Heads (Or, Two Men and a Baby Prince)

Henry IV, Parts 1 and 2 is a very unusual family drama. Instead of showing us a traditional nuclear family – Hal’s mother is famously absent from the plays, mentioned only twice, and both times in jest – Shakespeare instead gives us two father figures for Hal, each with their own characteristic virtues and vices. Take this speech: 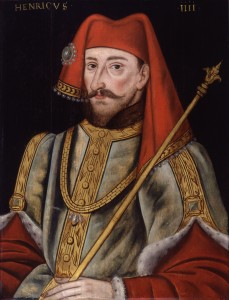 Wilt thou upon the high and giddy mast
Seal up the ship-boy’s eyes, and rock his brains
In cradle of the rude imperious surge,
And in the visitation of the winds,

Who take the ruffian billows by the top,
Curling their monstrous heads, and hanging them
With deafening clamor in the slipp’ry clouds,
That with the hurly death itself awakes? (Act 3, scene 1)

Heavy stuff. So says King Henry IV, halfway through Henry IV, Part 2. He is addressing Sleep, which has been absent from his eyes ever since he, as Richard Bolingbroke, deposed Richard II and usurped the English crown. The root of his power, his greatest virtue, is linked irrevocably to his greatest vice, the commitment of murder and treason against a sitting king. The image, as surprisingly often in Shakespeare, is a gloss on a divine homily, from Proverbs 23:29-33:

Yea, thou shalt be as he that lieth down in the midst of the sea, or as he that sleepeth on the top of a mast.

The author of these biblical verses was describing the behavior of those who had strayed from the holy path. The section begins by expounding on another cardinal sin: drunkenness.

To whom is woe? To whom is sorrow? […] And to whom is the redness of the eyes? […] Look at thou upon the wine when it is red and when it sheweth his color in the cup, or goeth down pleasantly. […] Thine eyes shall lock upon strange women and thine heart shall speak lewd things.

Put in biblical terms like this, the sufferings of the King are not so different from the inebriated gaiety of Sir John Falstaff, the fat old knight who dominates the stage when King Henry is absent from the scene. This section of Proverbs, conversely, recalls Falstaff’s famous speech on sack from later in the play, which Stephen Greenblatt has called “one of Shakespeare’s greatest odes to drunkenness”:

If I had a thousand sons, the first human principle I would teach them should be to forswear thin potations and to addict themselves to sack. (Act 4, scene 2)

Looking at these two speeches, linked together by the unlikeliest of biblical passages, we begin to see the design of Shakespeare’s two masterful, sweeping history plays. The one father, King Henry, is isolated from his people, locked up in solitary sleeplessness, a source of angst and fear for the itinerant young Prince. The other father figure, Falstaff, is the Prince’s favorite, a vision of drunken comic fun who nonetheless promises to addict him to the fattest and deadliest of potations. Hal is posed with a choice between King Henry and Falstaff, two equally unattractive fates. Shakespeare, in a feat of playwriting genius, sustains the thematic tension of this choice over the course of ten acts. Across tavern and street scenes, epic battles and drunken adventures, we keep asking ourselves: What is Hal going to do?

Telling would be spoiling. For the few who know the rarely performed Part 2 well, it is worth remembering that Hal is forced to reckon with the crown, and show his mastery of England’s laws, before he can deal unequivocally with Falstaff. Both sides of his nature have to be reconciled before he can become the king he is meant to be. The end of the play, and Hal’s reckoning with the weight of the crown, is forecast in Henry’s speech halfway through the play, which almost seems addressed to his son:

Canst thou, O partial Sleep, give thy repose
To the wet sea-boy in an hour so rude,
And in the calmest and most stillest night,
With all appliances and means to boot,
Deny it to a King?

He then utters some of the most famous lines in the Shakespearean canon, indeed in all of English literature, sounding the bottomless leitmotif of both plays.

Then happy low, lie down!
Uneasy lies the head that wears a crown.

Drew Lichtenberg is STC’s Literary Associate and the Production Dramaturg for Henry IV, Parts 1 and 2. He holds an MFA from Yale School of Drama.