The Washington Post reviews The Strange Undoing of Prudencia Hart

Peter Marks of The Washington Post recently saw the National Theatre of Scotland’s production of The Strange Undoing of Prudencia Hart, now playing through December 9 as part of the STC Presents Series. 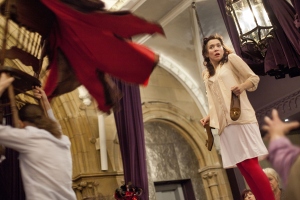 Photo of Melody Grove in the National Theatre of Scotland’s production of The Strange Undoing of Prudencia Hart by Drew Farrell.

If you’re thinking of ordering the usual, the Bier Baron Tavern isn’t the ideal destination these days. What’s flowing instead in this Dupont Circle establishment is the heady lyricism of dramatic ingenuity, brewed to the music of table-top harmoniums, Scottish border pipes and other instrumental exotica from the rugged north of the United Kingdom.

With the aid of Shakespeare Theatre Company, the brave hearts of the National Theatre of Scotland have set up shop in the bar on 22nd Street NW for a month-long run of “The Strange Undoing of Prudencia Hart,” a pleasurably interactive and often quite enchanting immersion in an inimitably Scottish style of storytelling.

Mind you, the story itself is whimsical in the extreme: a tale recited in rhymed couplets by five actors, about a prim Edinburgh researcher into Scottish border ballads who comes face to face with Beelzebub. It’s so emphatically tied to a regional culture that a sheet with a glossary of Scottish terms (“Corbies” for crows; “Beeching,” for a notorious local railway executive; the shorthand “SuBo,” for Susan Boyle) is left on your table. But with a wee bit of indulgence — and maybe a drop of two of the hard stuff — “Prudencia Hart” will weave its spell, drawing you in as a willing collaborator in its multitudinous shenanigans.

The Scottish company has become a major supplier for Shakespeare Theatre’s global-theater habit: its riveting Iraq war drama “Black Watch” recently finished a return engagement to Shakespeare’s Sidney Harman Hall. “Prudencia Hart” shares with “Black Watch” a penchant for fusing forms to bring theater more electrically into the lives of its audiences. In this case, the ancient tradition of the border ballads — described in the glossary as “long narrative folk songs and poems dealing with heroic deeds, supernatural encounters, love, passion and death” — is customized to the comic requirements of a more ironic age.

A lot of the charm of “Prudencia Hart,” of course, derives from the unorthodox surroundings in which it is staged. The actors, anchored by Melody Grove’s gracefully rendered, beautifully spoken Prudencia, circulate among us, climbing onto our tables, performing in the spaces between them, occasionally even coaxing spectators into the story. (Those less inclined to be human props are directed to tables set back a bit in the dark-walled taproom.) As the play takes place in a pub-within-a-pub, an audience is always aware of the levels on which “Prudencia Hart” operates: as a satire of the presumptions of pedagogy; a sendup of tavern culture; a reminder of the durability of ancient art.

The actors assume the roles of the scholars and other, more ethereal types Prudencia chances into before and after an academic luncheon in the 1,000-year-old Scottish Borders town of Kelso. They also pick up the instruments propped up along a wall of the pub and perform songs, contemporary and traditional, that are used to embroider the story. “Prudencia Hart” is not, however, a musical, nor could it even be characterized as a vehicle for an appreciation of Scottish folk music, orchestrated by composer Alasdair Macrae. It’s essentially a play, concerned in dramatist David Greig’s treatment with how one’s faith in old values can be reconciled with the world as it exists today.

Grove’s Prudencia is a snob who learns, courtesy of a demonically skilled mentor played by David McKay, to look beyond library shelves for a manual on art and beauty and how and whom to love. Her lesson itself takes on the characteristics of a heroic ballad; the rhyming form goes a long way toward establishing her as a figure with one foot in the 21st century and the other in the literary past. The intimations of Alexander Pope and John Milton alternate with prose passages and allusions to contemporary music, as when Macrae, portraying a desultory folk singer, croons a tin-eared version of “Blowin’ in the Wind.”

The production is buoyed by the resourcefulness of director Wils Wilson, who makes economical, and sometimes even hauntingly effective, use of limited space and design elements: the image of a spectral figure in the snow, embodied entrancingly by Annie Grace, is achieved with a white bathrobe and a flashlight. The ensemble actors, rounded out by Andy Clark, as Prudencia’s preening, academic nemesis, bring a satisfying brio to the play’s outrageous events.

As demonstrated of late by exemplary locally grown dramatic work, such as dogandponydc’s “Beertown,” enveloping audiences more resolutely in all dimensions of a play is becoming increasingly popular. “Prudencia Hart” not only advances the trend, it also allows you to raise an exuberant toast to it.