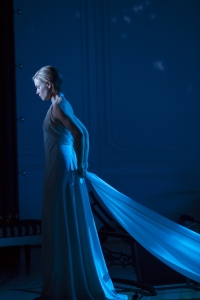 Hannah Yelland as Hermione in the Shakespeare Theatre Company’s production of 'The Winter’s Tale,' directed by Rebecca Taichman. Photo by T. Charles Erickson.

In a world of storytelling and, more specifically, in the world of Rebecca Taichman’s production of The Winter’s Tale, the characters’ journeys are heightened through the director’s craft of theatrical yarn-spinning, weaving Shakespeare’s story into an intricate tapestry. Her choice to have actors playing multiple parts heightens the already prevalent theme of transformation. Changing seasons, as in the play’s title, provide one thread of transformation. Aging, as our bodies warp over the course of time, provides another. The play’s setting likewise moves from the cold urbane world of Sicilia to the lush rural Bohemia. This duality of place allows the differences to show in stark relief, illuminating the characters’ journeys.

Perhaps the most radical of Taichman’s choices in this production is her decision to have the same performer play both the jealous king Leontes and the conniving rogue Autolycus. This specific doubling is rare, perhaps because doing so is logistically complicated as the actor has to make changes with sometimes rapid speed. At a glance, the characters feel very different, but they are actually opposing sides of a single coin. Where Leontes seeks out the truth but is unable to see it, Autolycus understands the truth but prefers to manipulate others with lies. The two characters reflect off of each other so well, in fact, that one may wonder if Shakespeare intended them to be played in that way. The scenes are structured so that watching Autolycus helps audiences engage differently with Leontes when the action returns to Sicilia. As the action moves forward from one character to another, the emotions shift, allowing the play’s resolution to unfold. As the play reaches its end and the truth is unveiled, we see how both men, the purposeful and mistaken liars, have had their previous states exchanged. Their transformations allow us to share in the profound moment of Leontes’ discovery, and understand that despite his unnecessary villainy there is room for his second chance.

When actors play two roles, the audience is always aware of the duality, which may affect their understanding of the characters. As the younger child of Leontes and Hermione, Perdita (whose name means “lost”) becomes the second chance at resolving the loss of the infant son Mamillius. One child is bound to the painful past, while the other grows up in Bohemia without knowledge of what has come before. Of course, the audience carries the past with them and knows that when those in Sicilia see her face, they will remember too. The transformation from one child to the other is facilitated by Taichman’s choice to cast one performer as both children, in addition to taking on a third linking role, that of Time. Speaking of the passing of 16 years, Time reminds us of the awful couplings of life—birth and death, youth and old age. With time moving forward, tragedy can be replaced by the springtime of youth.

Of the family, it is only the actress playing Hermione who maintains a single character. And yet, her multiple physical manifestations—as human, as ghost, as a work of art—exist only in the perception of others. She is introduced to the audience as maternal and loving and as her husband’s accusations hit she maintains her warm dignity. Yet, in Bohemia, Antigonus reports witnessing Hermione’s sorrowful ghost looking out for her daughter. After the scene returns to Sicilia, Hermione shows the audience that she is at once impervious to and reflective of the passage of time, physically aging while remaining bound to her new frozen form. Upon her reanimation there is little text for her, which mayshow an internal care not to be shared with the audience. It also shows the end of winter, aslow thawing into a renewed spring.

Hannah J. Hessel, STC’s Audience Enrichment Manager, is in her second season at STC and
holds an MFA in Dramaturgy from Columbia University.